After her death, Clara's obituary appeared in the local press:[1]

CLARA ELIZABETH SMITH.
We regret to report that the death occurred at the Orange District Hospital at an early hour on Monday morning last, of Clara Elizabeth Smith, wife of Mr. Thomas Smith, of Coates Creek, Red Hill, at the age of 58 years, from hydatids. The deceased lady, who had been suffering trom the dread complaint for some years, had undergone various courses of treatment for its relief, and a fortnight ago entered the Orange Hospital, where an operation aiming at the removal of the affection was performed. Such was successful, but she suffered a relapse on Thursday of last week, and gradually weakened until the end came on Monday. The remains were taken to the Manildra Methodist Church at noon on Tuesday, and at 2 p.m. Rev. E. Foster conducted a short service, after which the sad procession, one fully representative of the district and expressive of the general sympathy of its people, wended its way to the Meranburn Cemetery, where the last ries of sadness and of hope of re-union were conducted by Rev. E. Foster. The late Mrs. Smith was held in the highest esteem by all who had the honor of her acquaintance. For many years she was organist at the Red Hill Methodist Church, and was noted far and wide for her kind hospitality, unfailing sympathy to those in distress, and her sterling Christian character. She was an earliest and active participant in all Church activities, and during the war was prominent in Red Cross work. She was also a loving and devoted wife, and her bereaved husband, who is also held in the highest esteem, has the deep sympathy of a wide circle of friends in his great loss. Prior to her marriage the late Mrs. Smith was a Miss Gosper, and related to the Gosper and Atkinson families of the district.

When Clara's husband died nearly 10 years after her, his obituary also recorded that:[2]

His wife who predeceased him ten years ago was a daughter of the late Mr. Richard Gosper.

ask our community of genealogists a question.
Sponsored Search by Ancestry.com
DNA Connections
It may be possible to confirm family relationships with Clara by comparing test results with other carriers of her ancestors' mitochondrial DNA. However, there are no known mtDNA test-takers in her direct maternal line. It is likely that these autosomal DNA test-takers will share some percentage of DNA with Clara: 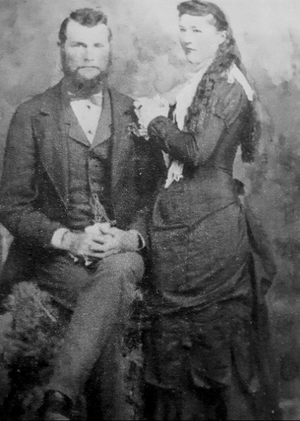