An old and respected resident of the Manildra district passed to her last reward on January 20, when the death occurred in Sydnev of Mrs. Jane Emmeline Atkinson 80. She was born in the Manildra district and was one of the wellknown, Gosper family, of the Red Hill and Bocobra district . Deceased had been in indifferent health for some time prior to her death. She was of pleasant disposition and was well known In Manildra & the surrounding districts . The interment took place in the Methodist portion of the Parkes cemetery. The late Mrs. Atkinson is survived by her husband, Arthur Henry Atkinson, seven daughters and five sons. They are Clara (Mrs. F. Allen, Parkes), Gladys (Mrs. C. Howarth, Macksville), Ida (Mrs. Carlson, Lithgow), Millie (Mrs. Armstrong, Sydney') Dorothy (Mrs . Baxter, Bathurst), Ruby (Mrs. H. O'Dwyer, Manildra), Irene (Mrs. C. | Stanford, West Wylong), Ernest (Mandagery), Cecil (Manildra), Reginald (Yeoval) George and Ronald (Bathurst). She is survived by 40 grand children and 24 great grand children . Mr. Reuben Gosper, late of "Hornseywood", Manildra was a brother.[1] 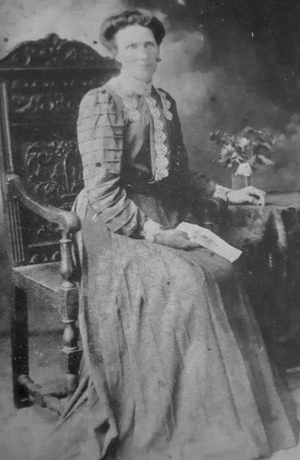