Francisco was born to a poor family in rural Spain.[2] Francisco's father, Jose, was the son of a notary.[1] A notary had a little education and could provide the simplest of legal services, somewhat a country lawyer.[1] Francisco's mother was of the hidalgo class, the most minor of nobility, they were financially handicapped by a prohibition against doing useful work, having a trade or a craft.[1]

Goya is considered to straddle the line between the Old Masters and the modern painters. His work was both the product and the instrument of change in the political and social consciousness of Western Europe.

Thank you to Ivan X for creating WikiTree profile Goya-1 and to everyone who contributed to this profile.

Is Francisco José your ancestor? Please don't go away!

ask our community of genealogists a question.
Sponsored Search by Ancestry.com
DNA
No known carriers of Francisco José's DNA have taken a DNA test. 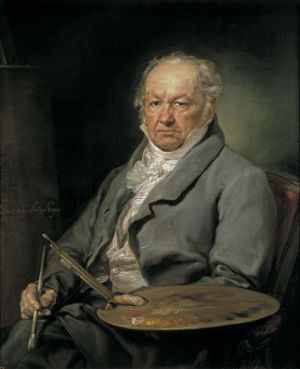