Gray, Jone - wife of John Hux: is listed as a Seventeenth Century Qualifying Ancestor of the Jamestowne Society:

Jone (Gray) Hux is a Qualifying Ancestor of the Jamestowne Society

Jone was born about 1618 in England. Her age was recorded in the Virginia muster of 1624 as six-years-old arriving with her father who was Thomas Graye. The ancient planter is said to have arrived on the Starr, which sailed in 1608.[1][2][3]

The family (Thos., Margrett, Joan and William), is listed Jamestown census of 1625[4]

Her father is Thomas Graye, ancient planter, who immigrated in 1608. The identity of her mother is unclear. Based on documentation, it's either Margrett or Annis. Her only full-blooded sibling is William I Gray, who died young (not to be confused with William II, who married Elizabeth Jarrett). Note: Other records show immigration as 1624 when Jone was 6.[5]

On May 9,1659,John Hux,aged 46 years testified that deponent married Jane Gray,daughter of Thomas Gray Sr. and sister of Thomas Gray Jr. at which time Thomas Gray Sr. told the deponent thet he had 50 acres of land, given to his sons and daughters by Mr. Gates,which land was part of a divident where he lived at Gray's Creek and that said Gray Sr. gave the depotent satisfaction for his wifes part there of , and was 25 acres.Witt: John Hux. Luke Mizell,aged 45 years,testified that when deponent (John Hux)was servant to Thomas Gray Sr.dec'd,he did often hear said Gray and his wife say that Gates had given 50 acres to their son Thomas and daughter Jane.May 11,1659. John Flood aged 44 years,he living some 10 years with Thomas Gray Sr. when he lived at Gray's Creek,had heard the same.[7]

Is Jone your ancestor? Please don't go away!

ask our community of genealogists a question.
Sponsored Search by Ancestry.com
DNA
No known carriers of Jone's DNA have taken a DNA test.

Images: 1
Graye family in the Musters of inhabitants of Viriginia 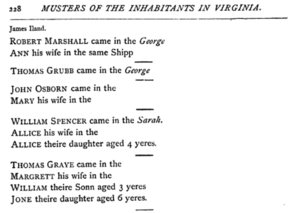 Leave a message for others who see this profile.
There are no comments yet.
Login to post a comment.
Anonymous Roach
Gray-8767 and Gray-6144 appear to represent the same person because: Same family. Mother is that same person . Merge has been proposed
posted Apr 19, 2017 by Anonymous Roach