The 1912 Indian census gives his Hocak name as Wasche Kesch She Kah, which appears to be for Wāškéšika, from wāšgé, wāšké, "poplar, quaking aspen"; šik, "good; to treasure, hold in honor, take part in favor"; and -ka a definite article suffix used in personal names. The name would mean, "He Who Honors the Poplar Tree." On the other hand, it could be from something quite different: waškí, "joke, joking, teasing"; and šik in the sense previously given. The name Waškíšika would mean, "Good Joking" or "He Favors Joking." Such a name would refer to the joking relationship between certain relatives, such as nephews/nieces and maternal uncles. This last name is actually the more likely.

His middle name "Ham" was given on his August, 1941 social security application.

When at age 26, on 5 June 1917, he filled out his draft card, where he was described as being of medium height and build, with black hair and brown eyes. He described himself as having "weak eyes."

His 1917 draft card states that he worked the family farm with his father. His social security number was 396161177.

He lived with his mother until her death in 1937. Up to that time he had never married, so his relationship with Sunshine was probably extra-marital. In 1940, according to the Federal census, he lived on his farm, valued at $1200, with his brother Frank and his family. No wife or children recorded.

"Abel Green [b. 1892] was still around when Nancy Lurie (Curator Emerita of Anthropology, Milwaukee Public Museum) began work with the Ho-Chunk tribe in the 1940s. She remembers him (private communication, 2007) as 'a quiet man with limited command of English -- his son was named Mark in honor of grandfather. His wife [Nina] rejoiced under the wonderful name of Sunshine Thundercloud. Sunshine was a nickname but the only one she was ever called'." (Weinhold, 25 nt. 9)

As the eldest son, Abel inherited his father's Warbundle which had been handed down to the eldest son since its creation by Black Otter.

The Wisconsin Death Index shows that he died on 20 January 1959 in Adams County, Wisconsin. He is buried in Neillsville, Wisconsin.

Is Abel your ancestor? Please don't go away!

ask our community of genealogists a question.
Sponsored Search by Ancestry.com
DNA
No known carriers of Abel's DNA have taken a DNA test. 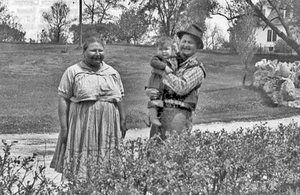