Mother of Francis E. LaMere, Laura E. LaMere and Pearl LaMere
Died before 1907 at about age 26 in Nebraska, United States

The name "Greenhair" in Hočąk would be Hįčowįga, from hį, "hair, fur"; čo, a color that span the spectrum from green through blue ("breen"); -wį-, an infix indicating female gender; -ga, a definite article suffix used in personal names. This is known to be a name in the Wolf Clan. Her father had the name Green Hair, but her marriage certificate shows that she adopted the Anglo name "White."

Jessie had the following children with Oliver LaMere:

Is Jessie your ancestor? Please don't go away!

ask our community of genealogists a question.
Sponsored Search by Ancestry.com
DNA
No known carriers of Jessie's DNA have taken a DNA test. 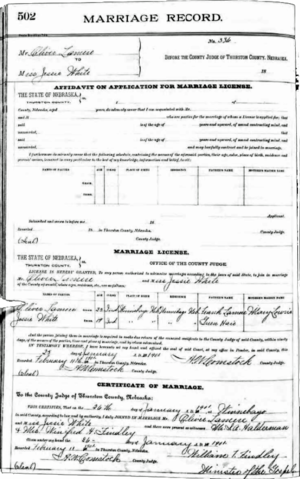