George Greentree was born May 3, 1838 in Freeman's Reach, New South Wales, Australia. Entered by Brian Brown and Updated by Paul Curran Sunday May 17, 2015 Replace this citation if there is an updated source[1]

George was the son of Reuben Greentree and Ann Farlow

Obituary appeared in the Windsor and Richmond Gazette, Saturday 16, October 1909

We referred briefly last week to the death of Mr.
George Greentree, -which took place on the 4th
instant, at the age of 71 years. For many years
the late Mr. Greentree resided at Freeman's Reach,
where he died, and was a native of the Hawkes-
bury district. He was one of the best of the
Hawkesbury natives, and was a scion of a family
whose name has been honoured in the district for
close upon a century. Deceased was a son of the
late Reuben Greentree, and a brother of
Mr. Reuben Greentree, J.P., of Wilberforce,
and was born on the farm now
occupied by Mr Caterson, within a mile
and a half of where he lived almost a life time.
He was one of our most sturdy and industrious
pioneers, and by thrift and capable management
earned for himself a comfortable competence. A
most unassuming man, though of a kindly dis-
position, was the late George Greentree. but he
feared no man and spoke out plainly when occa-
sion arose, and no one ever questioned his integ-
rity. For several years he had been closely asso-
ciated with the Hawkesbury District Agricultural
Association : he was a member of its Council at
the time of his death, and at the annual show
always gave valuable assistance. He was a breeder
of superior draught stock, and competent authori-
ties admitted that he was one of the best judges
of draught stock in the State. He was nominated
repeatedly by the H.D.A.A. to judge this class at
many shows, and the Council of affiliated asso-
ciations had him appointed a judge for the whole
State. In local affairs he took a commendable
interest, and took a prominent part in the estab-
lishment of the Freeman's Reach School of Arts,
and was a trustee of the property. Altogether
the late Mr Greentree was a man whom to know
was to like, and the GAZETTE always had a big
respect for him, albeit we did not always see eye
to eye in times of political warfare. His wife died
a few years ago, beloved by all. He leaves a
family of eight sons and two daughters to mourn
for a good father, and they, like him, are all held
in high esteem. The family are - Albert, Herbert,
and Clen., of Freeman's Reach; Mrs George
Dunston, Wilberforce ; Mrs P. G. Gilder, Rich
mond ; Fred, who is teaching near Blayney ;
Archie, West Maitland ; Percy, chemist, Coota-
mundra ; Harry, New Zealand; and Athol,
chemist, West Australia. The funeral took place
on Tuesday of last week, when the remains were
interred in the cemetery of old St, Matthew's
Church of England - a church he loved, and where
he regularly attended divine worship. It was an
exceptionally large funeral - one or the longest
ever seen in Windsor, and was attended by all
classes and creeds. Rev. N. Jenkyn conducted,
the burial, and in the church he paid an eloquent
tribute to the memory of a worthy man, who set
a noble example for his fellows. Mr J. W. Chand-
ler was the undertaker. [5]

Thanks to Brian Brown for starting this profile. Click the Changes tab for the details of contributions by Brian and others. 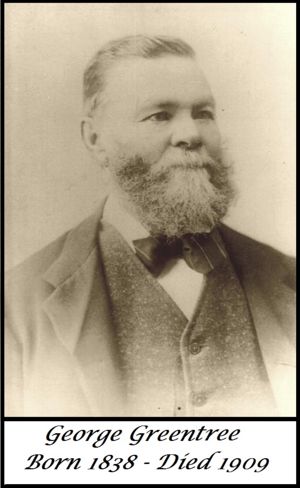