Reuben was the son of convict Henry Greentree and Jane Pope. After his father's transportation, he came to New South Wales with his mother and siblings via the ship Northampton, arriving 18th June 1815.

By 1828 Reuben was farming at Wilberforce, with 40 acres, 23 acres of cleared land, 3 horses and 7 cattle. He had the assistance of Thomas Rock to help him on the farm.

In about 1829, Reuben petitioned Governor Darling for a grant of land. In his petition he stated that he was supporting his mother who was living with him; he was married to a daughter of Mr Robert Farlow, had two children and was renting 40 acres of land. His petition was apparently to no avail.

In Jun 1832 Reuben purchased from Richard Reynolds, 15 acres of 'Reynolds Farm' ‎(His father in law, Robert Farlow also purchased another portion)‎. Located at Freeman's Reach, this land had been left to Richard Reynolds by his recently deceased brother Edward. The purchase price was 150 pounds.

In 1833 Reuben applied for another convict servant and by 1841 he and his family were living in a wooden house and he was employing an assigned labourer, a general labourer and a gardener.

In 1854, Reuben purchased for 1,850 pounds, the historic 'Reibycroft' property at Freemans Reach from John Yeomans, who had in 1844 bought it from Mary Reiby. Unable to raise the full price, Reuben borrowed from his friend John Dunstan. 'Reibycroft' was one of the great homes of the Windsor region and still stands but much modified. In 1862 Reuben sold Reibycroft to his son Robert and retired to Wilberforce, living with his son Reuben jnr.

Do you have information about Reuben Greentree? Please contribute to his biography. Everything on WikiTree is a collaborative work-in-progress.

Thanks to Brian Brown who created by this Profile , Brian plans to add sources here later and would like others to Collaborate and contribute to its building also.

ask our community of genealogists a question.
Sponsored Search by Ancestry.com
DNA Connections
It may be possible to confirm family relationships with Reuben by comparing test results with other carriers of his Y-chromosome or his mother's mitochondrial DNA. However, there are no known yDNA or mtDNA test-takers in his direct paternal or maternal line. It is likely that these autosomal DNA test-takers will share some percentage of DNA with Reuben: 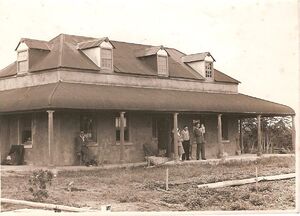