He arrived as a free settler with his mother Jane (Pope) Greentree aboard the NORTHAMPTON.

He married 2) Catherine Smallwood on October 29, 1879 in Windsor, New South Wales, Australia and She passed away on November 12, 1883 (date calculated via the New South Wales Births, Deaths, and Marriages On-Line Index) [3]

Deaths.
An old Hawkesbury identity, Thomas Greentree, of Wiseman's Ferry, passed away on the 2nd inst, and was interred on the 4th, in the Cemetery adjoining the Wesleyan Church, at Lower Hawkesbury. Deceased claimed to be one of the oldest inhabitants of Wiseman's Ferry and was able to tell many stirring tales of the early days.

River News.
Mr Thomas Greentree, an old river identity, who had attained the age of 80 years, died last week at Maroota. It is reported that death was primarily due to exposure, some persons having robbed his residence of the bed-clothing it contained, leaving him to sleep without covering for several nights. The funeral took place on Friday last, the remains of the deceased being interred in the cemetery adjoining the Wesleyan Church at Lower Hawkesbury, Mr. T. Collison being the undertaker.

A Correction.
To the Editor. Sir, In your Saturday's issue of the Gazette you state that my father Mr. Thomas Greentree died at Maroota and that his death was caused by exposure, someone having robbed him of the whole of his bed clothes. Will you kindly permit me to correct the mistakes in the above assertions. My father died at my residence, Lower Hawkesbury, where he had been an invalid for about nine weeks, for six of which he was confined to his bed. He certainly had been robbed at Maroota a short time previously of some of his bed clothes, while he was on a visit to me, but not for a single night was he entirely without covering, nor was his death in any way due to exposure. I may here state that my father's death was caused by a general breaking-up of his system, through old age. Trusting you will find space for the above corrections in your valuable paper.
I remain Yours &c. JESSE GREENTREE. Lower Hawkesbury.

PERSONAL
Mr. Wm. Freame writes : — It is a very old saying that " go were you will on the Hawkesbury you are bound to meet a Greentree," and so numerous have this family become that one stands a good chance of meeting some of them in other districts as well. The Greentree family are indeed identified with the old river, for the late Thomas and Rueben Greentree were old pioneers of the Hawkesbury. Thomas was the original owner of the old mill (since well-known as Singleton's Mill) on Mill Greek, Lower hawkesbury. This old structure and the surrounding scenery form the subject of a beautiful landscape, painted by Mr. W Lister. Lister, the well-known artist, so well represented in our National Art Gallery, and is situated near Wiseman's Ferry, about 10 miles below the Greentree's farm. It was in this old place that several of Thomas Greentree's children were born and he afterwards built the present mill, subsequently known as Singleton's Mill. Mr. T Greentree had a numerous family: Messrs. Henry Greentree, of Wilberforce ; Reuben, of Wyong; Thomas, of Plumpton ; and David, William, Saul, Eli, Nathan, Jesse, and I believe a second son also called Thomas, as well as two other sons by a second marriage and two daughters, Sarah and Jane. Mr. Jesse Greentree, as is well known, is a carpenter, and, unfortunately, he has had to undergo a serious operation in the Sydney Hospital, from which he is now recovering. Miss Sarah Greentree married a Mr. Don, well-known business man in Sydney, but since the death of her husband she has been living with her daughters at Glebe Point. Her son, Mr. Reuben L Don, holds a good position in the General Post Office. One of his hobbies is church architecture, a study of which affords him considerable pleasure. The home of the late Thomas Greentree was one of the landmarks down the river for some years. The services of the Lower Hawkesbury Methodist Church were held in his cottage, but a nice little church has since been erected on ground adjoining it. The cottage still remains, but since a newer home has been erected it has been used by Mr. Jesse Greentree as a workshop, &c. This farm is situated about five miles below Wiseman's Ferry, and is opposite Laughtondale, the old home of the Laughton's. A very nice view of the river and One Tree Hill may be obtained from the ground above the church. In a little burial-ground are four grave-stones, three of which are in line — the oldest being a stone somewhat elaborately carved by the late Thomas Greentree to the memory of his first wife, Sarah, who died in 1877. The middle stone of the three is erected to the memory of Sarah Chaseling ; the remaining one was erected after Mr. Greentree's death, and bears his epitaph, as well as those of his two wives Sarah and Catherine. In front of these stones, in a corner of the Lower Hawkesbury cemetery, is a fine stone to the memory of Ann Jane Woods. Mr. Jesse Greentree's farm is said to be the second best on the river, but of that I can say nothing. Mr. Nathan Greentree's farm is also in the neighbourhood, along the road that runs near the river; and Mr. Eli Greentree's is on the opposite side of the river, Laughtondale farms. Writing of Laughtondale one needs must think of the old pioneer local preacher who lived and died, and I believe was also buried there. One of his sons, John — ' Captain ' John—was well-known down Darling Harbour as the skipper of the schooner Pomona familiar on the northern rivers, Another son, Elijah, acquired some distinction on account of his patent medicine. As one gleans at first hand this little bit of history, the thought strikes us how our old river pioneers liked to perpetuate scriptural names, especially those of the old prophets, priests and kings of the Old Testament. Eli, so unfortunate with his sons; Nathan, the historian; Saul, the unhappy king ; David, the singer, the outlaw, and the successor to Saul ; Jesse, his father ; Elijah the prophet ; Reuben, Jonathan, etc. [Mr. Freame has promised to visit the Lower Hawkesbury and write up the whole of the district as a continuation of the series of articles that have appeared from time to time in the Gazette — Editor Gazette

IN MEMORIAM
GREENTREE. — In loving remembrance of our dear father, Thomas Greentree, of Lower Hawkesbury, who departed this life 2nd August, 1893, aged 79 years.

He is dead but not forgotten,
Never shall his memory fade,
Sweetest love will ever linger
Round the place where he is laid.

Inserted by his loving daughter and son-in-law, J. and C. Hobbs, Forrester. 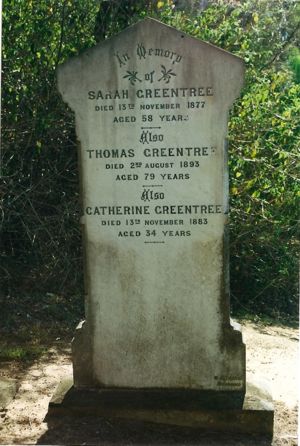 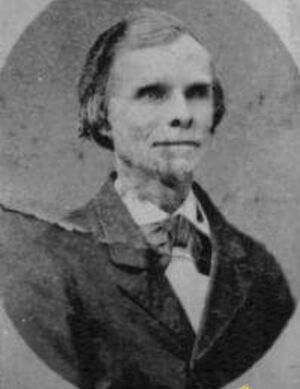