Jesse Greentree was born on October 21, 1853 in Lower Hawkesbury, New South Wales Australia. [1] [2] to Jesse was the son of Thomas Greentree and Sarah Stubbs.

Jesse died on February 22, 1908 in Wiseman's Ferry arrea, New South Wales, Australia. [4] Jesse would not have a peaceful death as he died a lingering and painful death from a growth on his face.

OBITUARY
The death took place on Saturday night of Mr.Jesse Greentree, of Lower Hawkesbury, at the ageof 53 years. The deceased had been a great sufferer for some time with a growth in his face,and was recently operated upon. He died a lingering death, and for the last few weeks his suffering was terrible. The late Jesse Greentree was a man who had many friends, all of whom regarded him as an upright, conscientious man. The esteem in which he is held was fully exemplified on Monday, when, despite the pouring rain, a very large concourse of people attended the funeral. The remains were interred in the Methodist portion of the general cemetery at Wiseman's Ferry, the Rev. A. Cooper performing the last sad rites. Mr. J. W. Chandler, of Windsor, con ducted the funeral. The deceased leaves a widow and three daughters and one son, all grown-up.

IN MEMORIAM
GREENTREE.—In loving memory of my dear husband and our father, Jesse Greentree, who died at Lower Hawkesbury, February 22, 1908. Inserted by his loving wife and family.

Is Jesse your ancestor? Please don't go away!

ask our community of genealogists a question.
Sponsored Search by Ancestry.com
DNA Connections
It may be possible to confirm family relationships with Jesse by comparing test results with other carriers of his Y-chromosome or his mother's mitochondrial DNA. However, there are no known yDNA or mtDNA test-takers in his direct paternal or maternal line. It is likely that these autosomal DNA test-takers will share some percentage of DNA with Jesse: 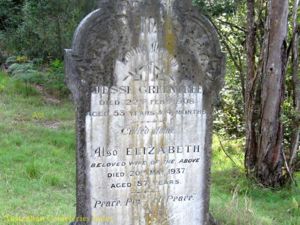