Arthur was born in 1896. Arthur Greenwell was the son of Eleanor Greenwell and Robert Greenwell of Huntly.

Arthur lived in New Zealand for at least 12 years prior to travelling to England to enlist.

Arthur joined the Royal Naval Air Service on 14 May 1916 and did pre-flight training on 23 September 1916 and was then posted to HMS Daedalus for flying training.

He passed away in 1916, having died from injuries sustained in a flight training accident. His accident occurred on the 19th of October but his death and the death certificate gives date of death as 20 October 1916.

He was flying solo in a BE 2C which crashed from 200ft on 19 October 1916 and he died in hospital the following day. Arthur was buried at Cranwell [St. Andrew] Church yard, and was 20 years old. 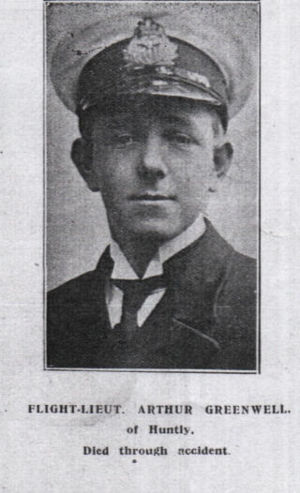