Wife of John Houghton — married before 1710 in Newcastle, Delaware

Ann was a Friend (Quaker)

Second child and only daughter of William Gregg II, Ann Gregg (also Amy Anne Gregg[1] and Onne Gregg[2][3] was born in County Waterford, Ireland, in 1670 and came with her father in the Scots-Irish Quaker immigration into Pennsylvania.[4][5] Anne's mother was Ann Wilkinson, who married William Gregg in Ireland, emigrated with him and their children to America in 1682/83, and who died in 1692 in New Castle County, Delaware.

Ann Gregg married William Dixon in Delaware in the 1690s and, after his death, married John Houghton around 1709/10.[4]

Speculation on these marriage dates range widely. Aligning authoritative sources for her 2 marriages with the birth dates of her children is needed. Ann's first marriage to William Dixon is shown as circa 1690 in The Era Magazine.[6] Based on that, I, Liz Shiflett, favor her birth year as being 1668 to 1670.[7] She was widowed in 1708,[8] so she could have married John Houghton in 1709 or 1710, as some have given the marriage year.[9]

Not speculative, however, is which children were born to William Dixon and which to John Houghton, since John's 1720 will includes last names for his children: Mary, Martha, and Rebecca Houghton and Dinah, Ann, George, Henry, Thomas, and John Dixon.[10]

This section by Michael Lechner, from Gregg-176.

Previous biography had a lot of repeated and contradictory information. Following is information that may be relevant from that previous version (to see the information as previously presented, click the Changes tab and go through edits to this profile).

Parents and first marriage: William married Ann GREGG, daughter of William GREGG and Ann WILKINSON, in 1696 in Newcastle, Delaware. (Ann GREGG was born in 1675 in Ardmore, Waterford, Ireland and died in 1729 in New Castle, Delaware.)[13]

William married Ann GREGG, daughter of William GREGG and Ann WILKINSON, in 1696 in Delaware. (Ann GREGG was born in 1675 in Ardmore, Waterford, Ireland and died in 1729 in New Castle, Delaware.)[15]

Sources listed by Michael Lechner with additional information about the Dixon children[17]:

John Gregg of Christiana Hundred, New Castle Co., yeoman, aged about 67 years, made a deposition about 1735 "that he has dwelt in said County about 51 yrs"

Note N223John Houghton was born in 1666 in New Castle, DE. He married Ann Gregg in 1709. Ann Gregg was born in County Kings, Ireland in 1670. She came to America with her father, William Gregg II, his wife, Ann or Martha, and her 3 brothers, John, George, and Richard on the ship Caledonia when she was 12 years old. As so many of our pioneer ancestors did, she married the boy next door, William Dixon or Dickson, whose fathers' land was next to her fathers' land. Ann had at least 7 children when her first husband died. She married John Houghton, and John and Ann then had three daughters: Martha, Mary, and Rebecca who was born when Ann was 45. John Houghton died in 1720 at only 54 when his daughters were 5, 8, and 10. Ann died in 1729 in New Castle Co, DE.

information still to be incorporated

Additional sources; not relevant information for this profile found online:

Is Ann your ancestor? Please don't go away!

ask our community of genealogists a question.
Sponsored Search by Ancestry.com
DNA Connections
It may be possible to confirm family relationships with Ann by comparing test results with other carriers of her mitochondrial DNA. However, there are no known mtDNA test-takers in her direct maternal line. It is likely that these autosomal DNA test-takers will share some percentage of DNA with Ann:

Images: 6
The tartan is the MacGregor 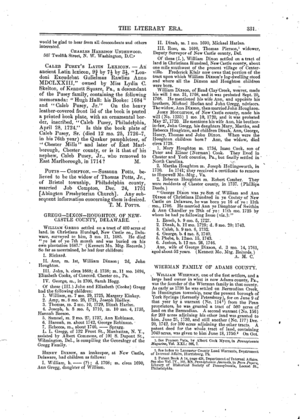 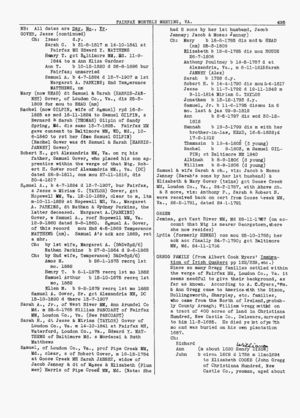 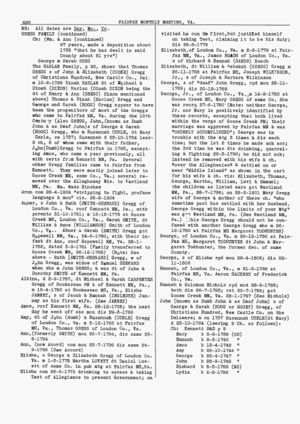 Glenn Dixon
Gregg-1261 and Gregg-34 appear to represent the same person because: The one difference I see is that Gregg-1261 shows a son of James Dixon born in Ireland in 1710. That is simply impossible since William Dixon died in 1708 and Ann married John Houghton in 1710 and had not been back in Ireland since she was 12 years old. Remove that one link and everything else should be mergeable.
posted Jul 01, 2018 by Glenn Dixon

David Black
Thanks Liz, you are correct. I haven't spent much time in WikiTree so there are items I have corrected in my personal tree that I have not corrected here.

Dixon died in 1708 and Ann married Houghton about 1710. They had 3 children; Mary, Martha, and Rebecca (dates of birth unknown). Houghton died in 1720 and Ann died in 1729. (info from Quakers in Delaware in the time of William Penn.pdf and other websites)

Liz (Noland) Shifflett
ah - I didn't look at page 3 closely enough... Kith & Kin has her born in County Armagh (however, it appears the source citation is for his first wife)

David Black
Gregg-493 and Gregg-34 appear to represent the same person because: According to historical records, these appear to be the same
posted Jul 24, 2014 by David Black