Henry Grey KG KB was a member of aristocracy in England.

"There were four chief rebel leaders:

Sir Thomas Wyatt, who owned large areas of land in Kent and had great influence there
Sir James Croft, who came from an influential Herefordshire family
Sir Peter Carew, who was an MP for Devon
Henry Grey, 1st Duke of Suffolk, who was based in Leicestershire...

Wyatt surrendered, and was tried and executed along with approximately 90 rebels, many of whom were hanged, drawn and quartered. Wyatt himself, after being severely tortured in the hope of extracting a confession implicating Elizabeth, was beheaded at Tower Hill and his body quartered. Courtenay was exiled and eventually died in Padua. Lord Thomas Grey and William Thomas were both executed. Throckmorton was found not guilty and released. Sir Nicholas Arnold, together with a few other ringleaders, was never brought to trial and eventually pardoned. Sir Peter Carew was imprisoned but released and Sir James Croft was tried and found guilty, but eventually pardoned. William St Loe also evaded punishment.[1]

Elizabeth was intensely interrogated and in danger of execution, but managed to be spared due to evasive and intelligent responses, in which she maintained she had been unaware of the planned uprising. Nothing could be proved, but the degree to which she was privy to the preparations has been questioned by modern scholars. Elizabeth remained imprisoned as a precautionary measure."

Croft and Carew evaded punishment; Grey and Wyatt were charged with treason and executed by beheading, as were his daughter, Lady Jane, and her husband, Dudley (brother of Elizabeth I's future consort). Many other rebels were hung as traitors." [1]

Henry Grey, 1st Duke of Suffolk, 3rd Marquess of Dorset KB KG (17 January 1517 –23 February 1554) was an English courtier and nobleman of the Tudor period. He was the father of Lady Jane Grey, known as the "Nine Day Queen".

He was the son and heir of Thomas Grey, 2nd Marquess of Dorset (1477–1530) by his wife Margaret Wotton (1487–1541), daughter of Sir Robert Wotton (c.1463–1524) of Boughton Malherbe in Kent. Through his father he was a great-grandson of Elizabeth Woodville, the queen of King Edward IV, by her first marriage to Sir John Grey of Groby.

Before 1530, Grey was betrothed to Catherine FitzAlan, the daughter of William FitzAlan, 18th Earl of Arundel, whom he later refused to marry.

Henry Grey became the 3rd Marquess of Dorset in 1530 following the death of his father. Before Henry VIII's death in 1547, Grey became a fixture in court circles. A knight of the Bath, he was the king's sword bearer at Anne Boleyn's coronation in 1533, at Anne of Cleves' arrival in 1540, and at the capture of Boulogne in 1545. Twice he bore the Cap of Maintenance in parliament. He helped lead the army in France in 1545. In 1547 he joined the Order of the Garter.

After Henry VIII's death in 1547, Grey fell out of favour with the leader of King Edward VI's government, Edward Seymour, 1st Duke of Somerset and Lord Protector of England. Returning to his home in Bradgate, Leicestershire, Grey concentrated on raising his family to greater heights. Thus, with the Protector's brother Thomas, Lord Seymour, Grey conspired to have his daughter Jane married to the King. This plot failed, ending in Seymour's execution, but Grey emerged unscathed.

In 1549, John Dudley, Earl of Warwick, overthrew the Protectorshipand secured power by appointing loyal friends to the Privy Council. Grey joinedthe Council as a part of this group. In July 1551 his wife's younger half-brother, Charles Brandon, 3rd Duke of Suffolk, died. Henry Grey was created Duke of Suffolk jure uxoris on 11 October 1551, in the same ceremony that elevated John Dudley to the Dukedom of Northumberland.

Henry Grey was best known for hiszeal for the Protestant faith. The Swiss reformer Heinrich Bullinger dedicated a book to him in 1551 and frequently corresponded with the family. In Parliamentand on the Privy Council, Grey pushed for further Protestant reforms. He is credited with making Leicestershire one of the most reliably Protestant counties inearly modern England.

Seriously ill, and fearing his own death, King Edward VI granted Northumberland's request for the marriage of Suffolk's daughter Lady Jane Grey to Northumberland's son, Lord Guildford Dudley, on 21 May 1553. Edward later altered his will to make Jane his designated successor. Edward died on 6 July 1553, and three days later Suffolk, Northumberland, and other members of the Privy Council proclaimed Jane queen. This proclamation failed, with a large-scale rallying of forces in the country to Henry VIII's eldest daughter, the future Queen Mary I.

By his wife's friendship with the new Queen Mary, Grey and his daughter and son-in-law temporarily avoided execution. However, Mary had Henry Grey beheaded on 23 February 1554, after his conviction for high treason for his part in Sir Thomas Wyatt's attempt (January – February 1554) to overthrow her after she announced her intention to marry King Philip II of Spain.

A mummified head, reputedly that of Henry Grey, 1st Duke of Suffolk, which had been found in 1849 in vaults at Holy Trinity, Minories and was later passed toSt Botolph's Aldgate where it was eventually buried in 1990.

According to Walter George Bell (writing in 1920), the severed head of the Duke was discovered in a vault in the Church of Holy Trinity, Minories in London in 1851, perfectly preserved by the tannin-rich oak sawdust used to pad the basket on the scaffold on which he had been executed 297 years earlier. Bell believed the head might have been hidden by the Duke's widow to prevent it from being exposed on a spike on London Bridge. Both of them had worshipped in the chapel at Holy Trinity. The church was closed in 1899 and deconsecrated and the head found a new restingplace at St. Botolph's Church, Aldgate, to which Holy Trinity Parish had been annexed. In 1920, the vicar of St. Botolph's kept it in a glass box inside a locked cupboard and was willing to display it to historians, but not to "mere tourists".

The head was examined in the late 19th century by Sir George Scharf,former Keeper of the National Portrait Gallery, who noted a strong resemblance between its features and those in the portrait of the duke then in the possession of the Marquess of Salisbury at Hatfield. However, Bell also notes a scandal at Holy Trinity in 1786 in which a sexton had been found sawing and chopping up coffins in the vaults and using the wood to stoke the fire in his quarters. Many of the bodies had been partly dismembered in the process and Bell warned his readers that the surviving head might well have resulted from this debacle.

In later years, the head was sealed in a vault in the crypt at St. Botolph's, until a planned conversion of the space into an office resulted in an archaeological investigation of the site between April and July 1990. The archaeologists recovered the head from the vault and it was buried in the churchyard by the parish. 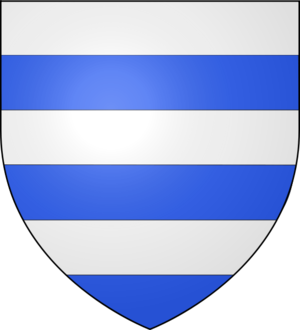 Categories: EuroAristo - Profiles that need work | Knights Companion of the Garter | Knights of the Bath | Beheaded | People Executed by the Tudors