Her eldest brother was beheaded for being a leader in the Southampton Plot that failed to assassinate Henry V,[3] while her first cousin was the on-again / off-again Yorkist, John de Mowbray, 3rd Duke of Norfolk. ... Norfolk and Maud, were grandchildren of Elizabeth Segrave and John, 4th Baron Mowbray.

In May 1399 Maud married Robert Ogle (d. 12 Aug 1436).[4] They had three sons, but sources conflict on the number and identity of their daughters. Burke states they had eight, while Richardson argues for seven.[5]

Maud's son Robert, 1st Baron Ogle (1406 - 1469), helped rocket the young and inexperienced Warwick to fame as the "Kingmaker,"[6] by pin-pointing Lancastrian vulnerabilities on the battlefield that started the Wars of the Roses.[7] As such, he was recognized as Northumberland's primary Yorkist.[6]

Maud (Grey) Ogle appears in Magna Carta Ancestry in a Richardson-documented trail from Gateway Ancestor William Bladen to Magna Carta Surety Baron William de Mowbray (vol. I, pages 211-214 BLADEN). That trail is in need of further development against the project's checklist and is set out in the Magna Carta Trails on the Gateway's profile.

Is Maud your ancestor? Please don't go away!

ask our community of genealogists a question.
Sponsored Search by Ancestry.com
DNA
No known carriers of Maud's DNA have taken a DNA test. 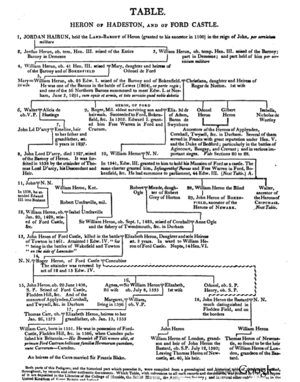 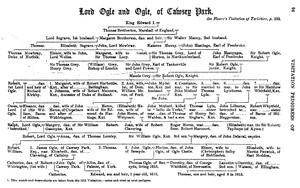