Thomas Leonard Griffin was the son of Joseph B. Griffin of The Current Settlement, Eleuthera Bahamas and Annie Fox of Long island.

TL's parents left the Bahamas during desperate times, taking his siblings along. TL tried various careers. In 1918, his draft form for the US military reports that he was employed in Hartford, CT as a steelworker. Many men of The Current made their livelihood as fisherman and for a while, Thomas was no exception. Several Men from the Current were also accomplished bootleggers, again TL was not an exception, in fact he may have been an inspiration to other impoverished Bahamians who immigrated to Florida, including Roland T. Symonette.

A HISTORY OF RIVIERA BEACH, FLORIDA, edited by Lynn Brink explains the setting for TL's career" Fishing has always been an important activity i n the Riviera Beach area. Both Lake Worth and the Gulf Stream o f f Singer Island offered excellent fishing. In the 1880s and 90s this was one of the attractions that drew the f i r s t tourists t o Oak Lawn. For years commercial fishermen from the Bahamas had been fishing the waters off Singer Island. Sometime before the F i r s t World War, a colony of fishermen settled as squatters on the At first they stayed only during the fishing season and returned to the Bahamas in the summer. The Bahamian fishermen were called "conchs." as they still are in the Keys, and Riviera was for many years nicknamed "Conch Town.""

T.L. immigrated to US to join the Bahamian fishing colony on Singers island and Conch Town. Riveria Beach, Florida. A HISTORY OF RIVIERA BEACH, FLORIDA, edited by Lynn Brink , written in 1975 says of T. L . that "He lives today in Riviera Beach, and says that by 1910 there were 12 to 25 men squatting on the island in the winter. They built shacks to live in and later were joined by thejr families. By 1914 there was a small Pentecostal church and a school on the island; a Mrs. Johnson was the teacher."

" While some fishermen lived on the island year round, many followed the flshing. Mr. Griffin fished i n Connecticut some sumners and said many commercial fishermen from New Jersey came to Riviera in the winter. In the early years the fish had to be taken by boat to the fish houses in West Palm Beach. About 1919 Charles Newcomb gave the Florida East Coast Railroad use o f some property on which t o construct a loading platform for the shipment'of fish. A barrel factory also was established. The f i s h were iced, placed i n wooden barrels and shipped by refrigerated railroad cars to Fulton's Fish Market in New York City. By the 1920's, Riveria was one of the largest fishing poets on the east coast of Florida. Three fish houses were built i n Riviera i n the 20s: R. R. Ricou and Sons. Richardson's and the Riviera Fish Company.

Around 1919 the fishing families l e f t Singer Island to join other fishermen on the mainland. This was due either to pressure from the landowners on the island, to the 1919 hurricane or to attractions of subdivisions in Riviera that were being developed for them. By 1922 there were 75 commercial fishing families in Riviera, many of whom were active in getting the town incorporated that year."

TL naturalized and served in US Military as part of the 211th engineers. He was honorably discharged.

TL was a bootlegger. "Because Prohibition was an unpopular law, breaking it without violence was acceptable to many ordinary citizens. Moonshining and bootlegging were lucrative businesses, especially during the difficult years after the boom ended."

"...Zell Davis of Pahokee, a successful trapper and hunter, married Olive Rowena Griffin of Riviera Beach. His brothers-in-law Thomas Leonard “T. L.” and Berlin Griffin introduced Davis to the “fun and games” of bootlegging, as explained by his son, Zell Davis, Jr., who became state’s attorney, in a 2004 oral history interview:

Berlin … would go out at the crack of dawn to go king fishing. … As the day wore on, he would slowly keep drifting further and further away from the king fishing fleet, and when he felt like it was safe, he would slip over to the Bahamas, get his load of liquor loaded in the middle of the night back into his king fishing boat, come back over, and get there about daybreak. … Then he would go in with the fleet and unload his booze."

…" [People] would ask him to bring liquor in, and they’d pay him a premium. … [H]e hired boats and captains. … And then it just got bigger and bigger and bigger, and he had boats that were taking liquor from Nassau all the way to New York. … [H]e and Joe Kennedy [father of President John F. Kennedy] made their own deal and brought liquor into this country with partners. …"

"Joe Risden, who had a gambling establishment here on Main Street—Royal Poinciana Way—lived on the lakefront just north of the golf course here in Palm Beach. In those days, it was all woods. You’d go down this long road, like a rut road, to his house, and there my dad would pick up liquor that had been dropped off the night before from some boat that came in from the Bahamas. … [E]veryone knew it, but they didn’t know it. …"

"When I [was] state’s attorney, [Berlin.] Griffin … said one day at our Thanksgiving dinner … “I’ve never met a politician I couldn’t buy.” … He went on to explain that he had paid federal judges, he had paid circuit judges, he had paid sheriffs—he owned everybody. And he cited examples and names and how he’d give this guy a car and this guy so much booze and—as we know, Prohibition was not well received by the populace. … [T]hey were never arrested. Their men were arrested, but they’d bail them out immediately and then that would be the end of the case."

When Prohibition was repealed in 1933, the Griffins used the money they had made to purchase legal licenses to sell liquor, said Davis, including “half a dozen” in Palm Beach."...

ask our community of genealogists a question.
Sponsored Search by Ancestry.com
DNA Connections
It may be possible to confirm family relationships with Thomas by comparing test results with other carriers of his Y-chromosome or his mother's mitochondrial DNA. However, there are no known yDNA or mtDNA test-takers in his direct paternal or maternal line. It is likely that these autosomal DNA test-takers will share some percentage (beta) of DNA with Thomas: 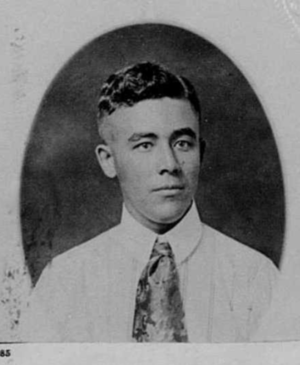