Elizabeth was a Friend (Quaker)

"One year before William Penn founded Philadelphia in 1681, Betsy Ross's great-grandfather, Andrew Griscom, a Quaker carpenter, had already emigrated from England to New Jersey." Andrew was successful at his trade. He was also of firm Quaker belief, and he was inspired to move to Philadelphia to become an early participant in Penn's "holy experiment." [1]

"Betsy is described as having been called the “Little Rebel” by British Officers who were quartered in her house, a name by which she became well known. She is also described by a great-niece (who as a child lived with her mother in Betsy’s house) as being a beautiful little old lady with very blue eyes." -- In affidavits by descendants done in 1909, for the publication of “The Evolution of the American Flag”

"Betsy was attractive and personable" -- According to Edwin Satterthwaite Parry (a direct descendant) in his 1930 book Betsy Ross, Quaker Rebel.

Her great-grandfather Andrew Griscom, a Quaker carpenter, emigrated in 1680 from England.[6] Andrew Griscom's grandson Samuel helped build the bell tower at the Pennsylvania State House (Independence Hall). He married Rebecca James who was a member of a prominent Quaker merchant family. It was not unusual for people in those days to have many children, so it is only somewhat surprising to learn that they had 17! Elizabeth Griscom — also called Betsy, a fourth-generation American, was born in Philadelphia, Pennsylvania, on January 1, 1752, their eighth child.[7][8] She grew up in a household where the plain dress and strict discipline of the Society of Friends dominated her life.[9]

As a child, she attended a private Quaker school where she was taught reading, writing.[10] She learned to sew from her great-aunt Sarah Elizabeth Ann Griscom.[11] After completing her schooling, Betsy's father apprenticed her to an upholsterer named William Webster.[12] In Colonial times, upholsterers performed jobs beyond sofa making and repairs.[13]

It was at her job that Betsy fell in love with another apprentice, John Ross, who was the son of Aeneas Ross (and Sarah Leach), an assistant rector at (Episcopal) Christ Church.[14] John’s uncle George Ross would become a signer of the Declaration of Independence.[15] Quakers frowned on inter-denominational marriages. The penalty for such unions was severe — the guilty party being "read out" of the Quaker meeting house. Getting "read out" meant being cut off emotionally and economically from both family and meeting house. One's entire history and community would be instantly dissolved. On a November night in 1773, 21-year-old Betsy eloped with John Ross. They ferried across the Delaware River to Hugg's Tavern and were married in New Jersey. Her wedding caused an irrevocable split from her family. Less than two years after their marriage, the couple started their own upholstery business and joined Christ Church, where their fellow congregants included George Washington and his family. Betsy and John Ross had no children.[16][17][18][19]

The American Revolutionary War broke out when Betsy and John Ross had been married for two years. They keenly felt the impact of the war. Fabrics needed for business were becoming hard to come by. Business was slow. John joined the Pennsylvania militia and was assigned to guard munitions. While guarding an ammunition cache in mid-January 1776, John Ross was mortally wounded in an explosion. Though his young wife tried to nurse him back to health he died on the 21st and was buried in Christ Church cemetery.[20][21]

In late May or early June of 1776, according to Betsy's telling, she had that fateful meeting with the Committee of Three: George Washington, George Ross, and Robert Morris, which led to the sewing of the first flag.[22]

After becoming widowed, Betsy returned to the Quaker fold, in a way. Quakers are pacifists and forbidden from bearing arms. This led to a schism in their ranks. When Free, or Fighting Quakers — who supported the war effort — banded together, Betsy joined them. (The Free Quaker Meeting House, which still stands a few blocks from the Betsy Ross House, was built in 1783, after the war was over.)[23]

Betsy would be married again in June 1777, this time to sea captain Joseph Ashburn in a ceremony performed at Old Swedes Church in Philadelphia.[24]

During the winter of 1777, Betsy's home was forcibly shared with British soldiers whose army occupied Philadelphia. Meanwhile the Continental Army was suffering that most historic winter at Valley Forge.[25]

Betsy and Joseph had two daughters (Zillah, who died in her youth, and Elizabeth). On a trip to the West Indies to procure war supplies for the Revolutionary cause, Captain Ashburn was captured by the British and sent to Old Mill Prison in England where he died in March 1782, several months after the surrender of Cornwallis at Yorktown, Virginia, the last major battle of the Revolutionary War.[26]

Betsy learned of her husband's death from her old friend, John Claypoole, another sailor imprisoned at the brutal Old Mill. In May of 1783, Betsy was married for the third time, the ceremony performed at Christ Church. Her new husband was none other than old friend John Claypoole. Betsy convinced her new husband to abandon the life of the sea and find landlubbing employment. Claypoole initially worked in her upholstery business and then at the U.S. Customs House in Philadelphia. The couple had five daughters (Clarissa Sidney, Susannah, Rachel, Jane, and Harriet, who died at nine months).[27][28]

After the birth of their second daughter, the family moved to bigger quarters on Second Street in what was then Philadelphia's Mercantile District. Claypoole passed on in 1817 after years of ill health and Betsy never remarried. She continued working until 1827 bringing many of her immediate family into the business with her. After retiring, she went to live with her married daughter Susannah Satterthwaite in the then-remote suburb of Abington, PA, to the north of Philadelphia.[29][30]

Ross, by then completely blind, spent her last three years living with her daughter, Jane, in Philadelphia. On Saturday, January 30, 1836, Ross died at the age of 84.[31]

In 1834, there were only two Free Quakers still attending the Meeting House. It was agreed by Betsy and Samuel Wetherill's son John Price Wetherill that the usefulness of their beloved Meeting House had come to an end. At that last meeting, Betsy watched as the door was locked, symbolizing the end of an era.[32]

Betsy died on January 30, 1836, at the age of 84. She has been buried in three different locations: Free Quaker burial ground at South 5th St. near Locust, Mt. Moriah Cemetery, and now on Arch Street in the courtyard adjacent to the Betsy Ross House. [33] 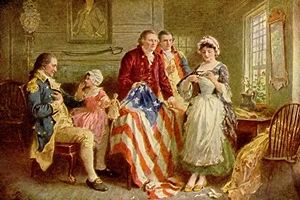 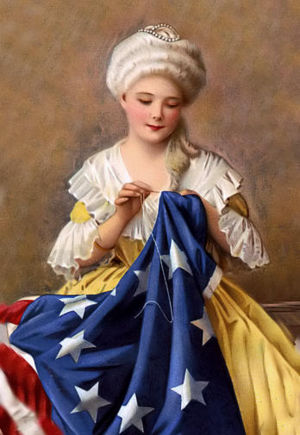 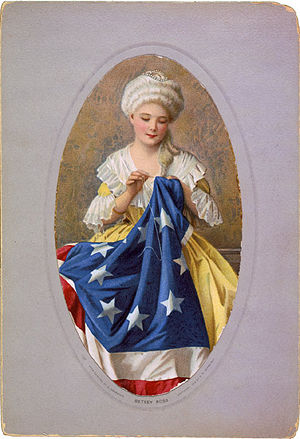 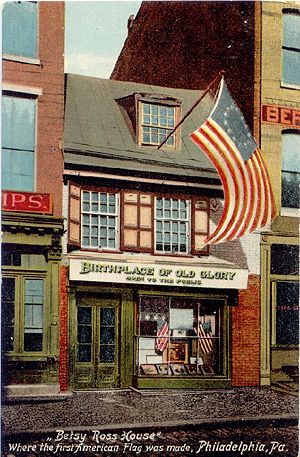