They were the parents of

He later married Susan C. Smith of Woodsboro on Jan. 1, 1852 in Frederick.

They were the parents of:

In the Spring of 1858 he moved with his family from Walkesville, Frederick County, MD to Philadelphia, PA. where he kept a stock yard and ran a hotel. In the Spring of 1861 he returned to Frederick, MD and opened a store selling goods at public auction.

Before the outbreak fo War:

Brengle Home Guard of Frederick City were formed April 24, 1861 - headed by Major Richard Potts and Capt. J. Alfred F. Brengle. Joseph Groff one of the other men to join the Home Guards.

Union Defenders of Frederick commissioned on June 7, 1861 by Gov. Thomas H. Hicks in Frederick. Joseph Groff was made a 3rd Lieutenant.

He enlisted as a 1st lieutenant, Co. B of 1st Potomac Home Brigade of Maryland on Aug. 21, 1861 at the Old Market House. At the same time his oldest child, William Shelton Groff, age 17 years, also enlisted into the same Company "B" with his father. William served as a private and later was promoted to corporal in the unit. The infantry regiment had its high officers: Colonels William P. Maulsby, Roger E. Cook, Lt. Cols. George R. Dennis, John A. Steiner, Charles J. Brown and Majors John I. Yellott and Eugene C. Baugher. This regiment was started in Frederick, Md. on Aug. 15, 1861, then mustered into the United States service by Major Smith - US Army on Friday-Sept. 6, 1861 at 4 o'clock PM. and by Dec. 13, 1861 put into service for 3 years.

During the winter of Dec.1861-April 1862 the regiment was lead by General Banks. They trained and were quartered on Barracks Hill near Frederick. In the winter of 1861 they left the barracks and wintered at Camp Worman, north of Frederick. All of the 1st P.H.B. were quartered there for the winter. By the spring time of 1862 the forces marched up the Shenandoah Valley as far as Winchester. Then it was assigned to guarding the Baltimore and Ohio railroad line. Gen. Banks and his troops were driven out of the Shenandoah Valley and stayed in the Harper's Ferry area. Joseph Groff had lived for 10 years (1840-1850) in Harper's Ferry.

After the second battle of Bull Run, the regiment guarded the passages along the Potomac River near the mouth of the Monocacy and then concentrated its efforts at Harper's Ferry. It was there that the regiment was surrendered on Sept. 15, 1862 after being surrounded by the Confederate forces. The Union soldiers were paroled and exchanged the next day. The regiment was then assigned to duty to Alexandria, Virginia, and along the Potomac in the southern part of Maryland. On Feb. 10, 1863, Lt. Joseph Groff was made a captain of Company "B" when Capt. Glessner resigned.

NOTE - The family story is that Capt. Groff stopped in Woodsboro on his way to Gettysburg in 1863 to kiss his daughter (Rebecca) good-bye. At the Battle of Gettysburg (July 1-3, 1863), the regiment was part of Gen. Lockwood's brigade. On July 2nd the regiment fought on Culp's Hill and worked with Sickles Corps to repulse the Confederates under Gen. Longstreet. Capt. Joseph Groff fought at Spangler's Spring in the early hours of July 3, 1863 and was wounded just above his foot. He was allowed to go to his home in Frederick, Md. to have a doctor take care of his wound.

Capt. Groff's regiment left Gettysburg and marched with the Army of the Potomac in pursuit of General R. E. Lee and his forces. The 1st Potomac Home Brigade went as far as the Potomac River, where it was then assigned the duty of guarding the Baltimore & Ohio railroad line.

In July, 1864, the 1st Maryland Potomac Home Brigade regiment took part in keeping the Confederates from invading into Maryland and also fought in the Battle of Monocacy under General Wallace.

During the fall of 1864, the soldiers' whose term of enlistment expired were mustered out. This included Capt. Joseph Groff and his son, William S. Groff, who were mustered out on Sept. 6, 1864 at Harpers' Ferry, Virginia. Honorable discharged in Washington, DC in Dec. 1864.

Wed. - Sept. 12, 1866 -- John H. Uhler walked on a wire stretched across the street from the Groff Hotel to Edward Koontz houses on North Market Street. Mr. Uhler did fall to the paved street and broke his arm and leg. It happened at 2 o'clock PM.

Thursday - Dec. 27, 1866 --- A tremendous storm in Frederick. Several homes and buildings damaged. The Groff Hotel's tin roof torn and was partially hanging over the building onto Market Street.

1878 - Frederick had a population of about 10,000. Joseph ran one of the city's hotel and William (his son) made mattresses and upholstered furniture.

1880 census - had Nicholas H. Groff living with his family. Nicholas - age 13, born about 1867 in MD as were his parents. Listed on the census was that he could not read or write but had attended school in the last year.

Nov. 1886 - David Cronin worked for Capt. Groff at the Hotel. On Oct. 1886 - Cronin shot his wife after a disagreement. They had married about 1863 in Frederick. Cronin then joined the Union Army and to war. He remained away from Frederick until about 1885 and then came back to his wife (lived on West 4th St.)

May 1887 - Mr. P. E. Long Baltimore, MD - rented the Groff Hotel from Capt. Groff, the captain and family moved to Groff Park at the north end of the city.

Aug. 1889 - Capt Groff was in West Virginia, (Jefferson County) to supervise the construction of the Sheperd Turnpike.

About 1890 - the large iron four-tier fountain is built in front of the Groff House, North Market St. and 7th (still standing as of 2008).

March 1890 - David Groff took over ownership of the Groff brickyard.

April 1890 -- AD appeared in the Frederick newspaper - about Groff Hotel, owned by Misses Groff (Joseph's daughters) and managed by Dudrear. Cost $1.50 per day for a room (1st class).

May 1890 - John Groff has ownership of North End Livery and Sales Stables.

April 30, 1891 - quote in News by Capt. Groff - "I have lived in Frederick a long time and have seen many changes wrought, but the bustle and activity here this spring are greater than I ever saw before. The old town is certainly waking up at last."

June 1891 - selling large lots of property at Groff Park - 30 acres (west of Frederick). Possibly big sale to a gentleman from Washington, DC. No sale then. Groff Park also known as Schentzen Park. Placed many newspaper ads for sale of Park, Hotel and Hall in late 1891.

June 1896 - home robbery at night while family slept. Only money taken. His sister, Elizabeth was visiting at the time. 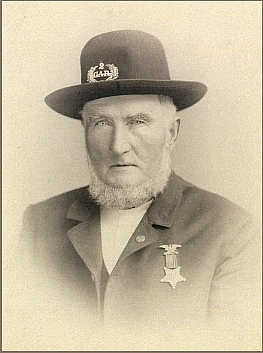 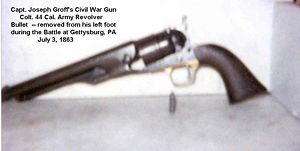