He was the second James Henry Grovesteen.[1]

James and Anna are mentioned in the marriage record of their son William: William Patten Grovesteen, 23, and Mary Law Field, 19, both born in New York City, were married on 23 October 1878 in Brooklyn, Kings, New York. It was the first marriage for both. Mary was the daughter of Charles H. Field and Emily Smith. William was the son of James Henry Grovesteen and Anna Vanderhoof. [5]

J.H. Grovesteen began building pianos early in his life. He had several successful partnerships during his long career as a piano maker: 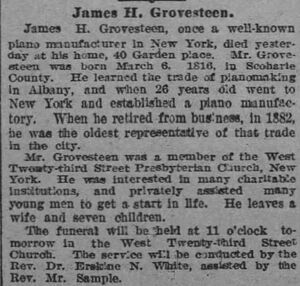