Arthur Guinness was born in Ireland.

Arthur Guinness was the founder of Guinness brewery.

Arthur's place of birth has been the subject of some question, or "family tradition." One often reported birth place is the home of his Read grandparents, at Huttonread, Co. Kildare, Ireland. Some say it was then the custom for an expectant mother to return to her home to give birth. Apparently there is a lack of evidence for the name of Arthur's mother and no record of Arthur's birth.[3]

At the time of his birth, Arthur's father is said to have been employed by Dr. Arthur Price (later Archbishop of Cashel), as the Land Steward to his property.[1] One of the Steward's responsibilities was to brew the beer for the workers at the estate near Cashel.[1]

Note: This profile reported an exact birth date March 12, 1725, but the source is questionable (Ancestry.com "Family Tree"). The information about Arthur's mother's name and the origin of Richard Guinness are also questionable. The sources for this information seem to be either Guinness Beer corporate publications or Ancestry.com "Family Trees." Bill Yenne, who researched the family for his book, Guinness, found no such evidence for the mother's name, nor for Richard Guinness' origins.[3]

Arthur probably learned about beer brewing by helping his father. Once on his own, Arthur started with a small brewery near Leixlip.[1] He gifted that business to his younger brother, and on 31 December 1759, signed a lease on a floundering brewery at St James’s Gate in Dublin.[1] By the 1770's, Arthur was brewing the new darker ale called porter.[1] In the span of only eight years, he went from a new member of the Dublin Brewers and Maltsters Corporation to become Master of the Corporation.[1] In 1799, he made the momentous decision to brew only the iconic Guinness porter.[1]

Arthur died in 1803. According to Bill Yenne, in Guinness, he died at his country estate, Beaumont (page 24), "leaving a legacy and a name that would stand the test of time."[3]

He left a considerable fortune, £23,000, as well as the thriving business.[1] Three of his sons continued in the Guinness Brewery.[1]

The place of Arthur’s birth is also the subject of mild controversy. Local tradition in the Co Kildare village of Ardclough holds that Arthur was born at the Read household in nearby Huttonread. This seems to be based on the notion that, in the early 18th

He married Olivia Whitmore in Beaumont, Dublin, on 17 June 1761(she was 18 , half is age) .Her parents were wealthy gentry, and her dowry was over 1000 pounds. This would have aided the brewery expansion and developments.

Not only was he famous for establishing Guinness brewery in Dublin Ireland and also established in 1786 the first Sunday, Schools in Ireland .Fought against dueling, and was governor of a hospital for the poor.

posted 25 Jul 2012 by Phil Richardson   [thank Phil]
Anonymous McCann
In 1767, Arthur became Master of the Corporation of Brewers.
posted 4 Aug 2008 by Anonymous McCann
Anonymous McCann
In 1763, Arthur Guinness was elected Warden of the Dublin Corporation of Brewers.
posted 4 Aug 2008 by Anonymous McCann
Login to add a memory.
Sponsored Search by Ancestry.com
DNA Connections
It may be possible to confirm family relationships with Arthur by comparing test results with other carriers of his Y-chromosome or his mother's mitochondrial DNA. However, there are no known yDNA or mtDNA test-takers in his direct paternal or maternal line. It is likely that these autosomal DNA test-takers will share some percentage of DNA with Arthur:

Lovely Day for a Guinness poster 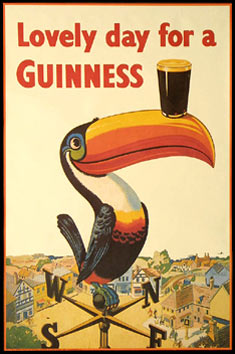 We plan on featuring Arthur alongside St. Patrick, the Example Profile of the Week in the Connection Finder on March 17th. Between now and then is a good time to take a look at the sources and biography to see if there are updates and improvements that need made, especially those that will bring it up to WikiTree Style Guide standards. We know it's short notice, so don't fret too much. Just do what you can. A Team member will check on the profile Tuesday and make changes as necessary.

posted Mar 15, 2021 by Abby (Brown) Glann
John Falvey
The marriage link no longer works, the marriage entry in the church register of St. Mary can be seen at https://churchrecords.irishgenealogy.ie/churchrecords/display-pdf.jsp?pdfName=d-277-1-2-257

Curiously there is also this entry in "The Magazine of Magazines" for May 1761 "30. Arthur Guinnefs brewer, to Mifs Whitmore of Capel-ftreet. "

Cynthia (Billups) B
The information reported here on Arthur's mother is questionable. Also seems that the origin of Richard Guinness is unknown. (Of course, someone else might have newer, or better, information than what I could find)

Anyone know anything? Should Elizabeth Read be detached as mother?

posted Feb 17, 2015 by Cynthia (Billups) B
[Living McCann]
A big thanks to Chris Nelson (aka The Beer Geek) for providing info on Arthur's place of death. You can find Chris' blog here: www.thebeergeek.com.
posted Dec 16, 2008 by [Living McCann]
[Living McCann]
Here is a great link to more history on the Guinness family and brewery: