Charles V (French: Charles Quint ; German: Karl V.) (24 February 1500 – 21 September 1558) was ruler of the Holy Roman Empire from 1519 and, as Charles I (Spanish: Carlos I), of the Kingdom(s) of Spain (Reino de España) from 1516 until his voluntary abdication in favor of his younger brother Ferdinand I as Holy Roman Emperor and his son Philip II as King of Spain in 1556. Charles was the heir of three of Europe's leading dynasties, the House of Habsburg of the Habsburg Monarchy, the House of Valois-Burgundy of the Burgundian Netherlands, and the House of Trastámara of the Crowns of Castile and Aragón.

Charles was born as the eldest son of Philip the Handsome and Joanna the Mad in the Flemish city of Ghent in 1500. He was betrothed to both Louise and Charlotte of Valois, daughters of King Francis I of France, but they both died in childhood. After the death of his paternal grandfather, Maximilian, in 1519, he inherited the Habsburg Monarchy. Charles abdicated as emperor in 1556 in favor of his brother Ferdinand. After abdication he retired to the Monastery of Yuste, in the province of Cáceres in Extremadura, Spain, for the final 2 years of his life.

On 10 March 1526, Charles married his first cousin Isabella of Portugal, sister of John III of Portugal, in Seville. Their children included:

Charles also had several mistresses. Two of them gave birth to two future Governors of the Habsburg Netherlands:

Charles suffered from an enlarged lower jaw, a deformity that became considerably worse in later Habsburg generations, giving rise to the term Habsburg jaw. This deformity was caused by the family's long history of inbreeding. Charles died on 21 September 1558 from malaria. Twenty-six years later, his remains were transferred to the Royal Pantheon of the Monastery of San Lorenzo de El Escorial.

p. Philip the Handsome and Joanna the Mad

Is Charles V your ancestor? Please don't go away!

ask our community of genealogists a question.
Sponsored Search by Ancestry.com
DNA
No known carriers of Charles V's DNA have taken a DNA test. 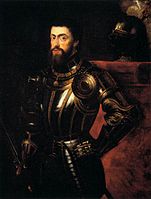 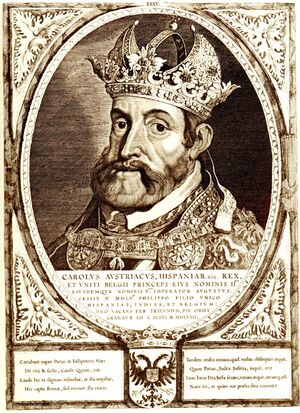 The Germany Project would like to co-manage this profile with you. You are welcome to stay on as either a PM or on the Trusted List. If I don't hear back from you in the next week, I'll go ahead and add Germany as a co-manager. Any questions, please let me know.

You are my 13th Cousin 13 times removed we are both descendants of Matilda (Senlis) Clare.