Karl VI Habsburg was a member of the aristocracy in Europe.

Charles VI (1 October 1685 – 20 October 1740) succeeded his elder brother, Joseph I, as Holy Roman Emperor, King of Bohemia (as Charles II), King of Hungary and Croatia (as Charles III), and King of Serbia, Archduke of Austria, etc., in 1711. He unsuccessfully claimed the throne of Spain as Charles III following the death of its ruler, and Charles's relative, Charles II of Spain, in 1700. He married Elisabeth Christine of Brunswick-Wolfenbüttel, by whom he had his two children: Maria Theresa, born 1717, the last Habsburg sovereign, and Maria Anna, born 1718, Governess of the Austrian Netherlands.

Four years before the birth of Maria Theresa, faced with his lack of male heirs, Charles provided for a male-line succession failure with the Pragmatic Sanction of 1713. The Emperor favoured his own daughters over those of his elder brother and predecessor, Joseph I, in the succession, ignoring the decree he had signed during the reign of his father, Leopold I. Charles sought the other European powers' approval. They exacted harsh terms: Britain demanded that Austria abolish its overseas trading company. In total, Great Britain, France, Saxony-Poland, the Dutch Republic, Spain, Venice, States of the Church, Prussia, Russia, Denmark, Savoy-Sardinia, Bavaria, and the Diet of the Holy Roman Empire recognised the sanction. France, Spain, Saxony-Poland, Bavaria and Prussia later reneged. Charles died in 1740, sparking the War of the Austrian Succession, which plagued his successor, Maria Theresa, for eight years.[1]

Is Karl VI your ancestor? Please don't go away!

ask our community of genealogists a question.
Sponsored Search by Ancestry.com
DNA Connections
It may be possible to confirm family relationships with Karl VI by comparing test results with other carriers of his Y-chromosome or his mother's mitochondrial DNA. However, there are no known yDNA test-takers in his direct paternal line. Mitochondrial DNA test-takers in the direct maternal line: 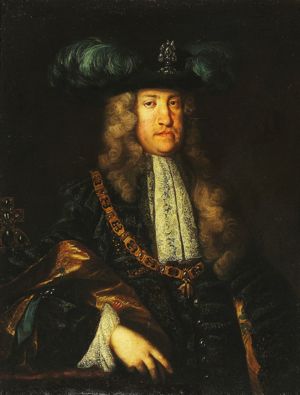