Marie-Thérèse Habsburg was a member of the aristocracy in Europe.

Maria Theresa of Spain (Spanish: María Teresa; French: Marie-Thérèse; 10 September 1638 – 30 July 1683) was Queen of France and Navarre as the first wife of King Louis XIV. Born an Infanta of Spain at the Royal Monastery of El Escorial, she was the daughter of King Philip IV, and his wife Elisabeth of France, who died when Maria Theresa was six years old. As a member of the House of Habsburg, Maria Theresa was entitled to use the title Archduchess of Austria.

Maria Theresa and the French king Louis XIV were double first cousins: Louis XIV's father was Louis XIII of France, who was the brother of Maria Theresa's mother, while her father was brother to Anne of Austria, Louis XIV's mother. On 9 June 1660, the marriage took place in Saint-Jean-de-Luz at the recently rebuilt church of Saint Jean the Baptist.

Maria Theresa fell ill and died a painful death on 30 July 1683, at Versailles. Of her six children, only one survived her, Louis, le Grand Dauphin, the oldest one, who died in 1711.

Is Marie-Thérèse your ancestor? Please don't go away!

ask our community of genealogists a question.
Sponsored Search by Ancestry.com
DNA Connections
It may be possible to confirm family relationships with Marie-Thérèse by comparing test results with other carriers of her mitochondrial DNA. Mitochondrial DNA test-takers in the direct maternal line: 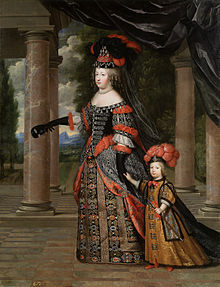