Leopold II Habsburg-Lothringen was a member of the aristocracy in Europe.

Leopold II (German: Peter Leopold Josef Anton Joachim Pius Gotthard; Italian: Pietro Leopoldo Giuseppe Antonio Gioacchino Pio Gottardo; English: Peter Leopold Joseph Anthony Joachim Pius Godehard; 5 May 1747 – 1 March 1792), was Holy Roman Emperor and King of Hungary and Bohemia from 1790 to 1792, Archduke of Austria and Grand Duke of Tuscany from 1765 to 1790. He was a son of Emperor Francis I and his wife, Empress Maria Theresa, thus the brother of Marie Antoinette. Leopold was a moderate proponent of enlightened absolutism.

Leopold was born in Vienna, the third son, and was at first educated for the priesthood, but the theological studies to which he was forced to apply himself are believed to have influenced him against the Church.

On the death of his elder brother, Charles, in 1761, it was decided that he should succeed to his father's grand duchy of Tuscany, which was erected into a "secundogeniture" or apanage for a second son. This settlement was the condition of his marriage on 5 August 1764 with Infanta Maria Luisa of Spain, daughter of Charles III of Spain and Maria Amalia of Saxony. On the death of his father, Francis I (18 August 1765), he succeeded to the grand duchy. Leopold was famous in Florence for his numerous extra-marital affairs. Among his lovers was Countess Cowper, wife of the 3rd Earl Cowper, who in compensation for being cuckolded was given honours by Leopold's brother, Joseph II.

Leopold, during his government in Tuscany, had shown a speculative tendency to grant his subjects a constitution. When he succeeded to the Austrian lands, he began by making large concessions to the interests offended by his brother's innovations. He recognized the Estates of his different dominions as "the pillars of the monarchy", pacified the Hungarians and Bohemians, and divided the insurgents in the Austrian Netherlands (now Belgium) by means of concessions. When these failed to restore order, he marched troops into the country and re-established his own authority, and at the same time the historic franchises of the Flemings. Yet he did not surrender any part that could be retained of what Maria Theresa and Joseph had done to strengthen the hands of the state. He continued, for instance, to insist that no papal bull could be published in his dominions without his consent (placetum regium). One of the harshest actions Leopold took to placate the noble communities of the various Habsburg domains was to issue a decree on 9 May 1790, that forced thousands of Bohemian serfs freed by his brother Joseph back into servitude.

Leopold lived for barely two years after his accession as Holy Roman Emperor, and during that period he was hard pressed by peril from west and east alike. The growing revolutionary disorders in France endangered the life of his sister Marie Antoinette of Austria, the queen of Louis XVI, and also threatened his own dominions with the spread of subversive agitation. His sister sent him passionate appeals for help, and he was pestered by the royalist émigrés, who were intriguing to bring about armed intervention in France.

He died suddenly in Vienna, in March 1792, although some claimed he was poisoned or secretly murdered.

Like his parents before him, Leopold had sixteen children, the eldest of his eight sons being his successor, Emperor Francis II. Some of his other sons were prominent personages in their day. Among them were: Ferdinand III, Grand Duke of Tuscany; Archduke Charles of Austria, a celebrated soldier; Archduke Johann of Austria, also a soldier; Archduke Joseph, Palatine of Hungary; and Archduke Rainer, Viceroy of Lombardy-Venetia.

Mozart's opera La clemenza di Tito was commissioned by the Estates of Bohemia for the festivities that accompanied Leopold's coronation as king of Bohemia in Prague on 6 September 1791.[1]

Is Leopold II your ancestor? Please don't go away!

ask our community of genealogists a question.
Sponsored Search by Ancestry.com
DNA Connections
It may be possible to confirm family relationships with Leopold II by comparing test results with other carriers of his Y-chromosome or his mother's mitochondrial DNA. However, there are no known yDNA test-takers in his direct paternal line. Mitochondrial DNA test-takers in the direct maternal line: 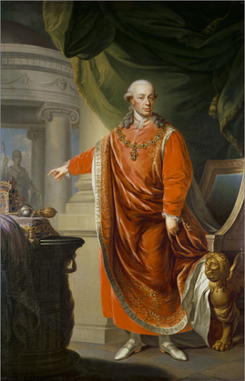 Leopold II is 20 degrees from Jaki Erdoes, 7 degrees from Wallis Windsor and 8 degrees from Henry VIII of England on our single family tree. Login to find your connection.