Mother of Jacob M Stapleton
Died before 1801 before age 86 in Berks County, Pennsylvania

An Anna Barbara is the last-named daughter in Andreas HAGENBUCH’s will. He mentions her as having problems with her health and being in need -- she got an extra legacy and a share of the remainder after specific bequests were honored.

Some think she is not a HAGENBUCH. One said in 2012: “Two STRAUB babies were sponsored by Tobias & Barbara STAPLETON.  The babies’ mother was a DELONG, [so] I have wondered if Barbara might have been a DELONG.  The DELONGs hailed from New York, as did the STAPLETONs.”.

Another researcher said “I can tell you, that without a shadow of a doubt, that Barbara, married to Tobias Stapleton was NOT a Hagenbuch.  She did not come on the ship with Andreas, had not been born when he came to this country, and was a child at best when Tobias got married.  There is no evidence who the Barbara was who married Tobias.”.

If Barbara was a HAGENBUCH, she must have been Andreas HAGENBUCH’s sister, not daughter.

An Anna Barbara HAGENBUCH b. Wuerttemberg 1734 is perhaps her niece, too young to be mother of Tobias STAPLETON’s children b. in 1740s.

Anna Barbara is not mentioned in husband Tobias’s 1801 will, probated 1805.

As of 2005, researchers have found one b. 1734 in Grossgartach in Wuerttemberg and confirmed there 1743 (recorded here as Andreas’s daughter, but may belong to a different father of same name) and another woman of same name who was probably b. abt 1720 and m. Tobias STAPLETON in Albany Twp Berks Co. -- a woman born 1734 can’t be mother of Stapleton's children born in the 1740s.

About Anna Barbara 1734: the fact that her mother was remarried to PFAU at the time of the girl’s 1743 confirmation suggests that the 1734 Barbara, about whom we know nothing more, probably will be found in Europe, not America.

Yet Andreas HAGENBUCH’s will in 1785 mentions a daughter Anna Barbara as having problems with her health and being in need -- she got an extra legacy and a share of the remainder after specific bequests were honored. Was she a daughter of Andreas by an early marriage to a first wife (marriage not found in Grossgartach/Schwaigern records) -- he would have been 19 at her birth. 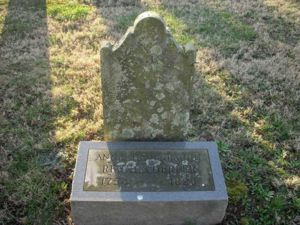