Haggard-477 was created by Sheila Wohlrabe through the import of Remling_Reams.ged.

Is Merle your relative? Please don't go away!

ask our community of genealogists a question.
Sponsored Search by Ancestry.com
DNA Connections
It may be possible to confirm family relationships with Merle by comparing test results with other carriers of his ancestors' Y-chromosome or mitochondrial DNA. Y-chromosome DNA test-takers in his direct paternal line on WikiTree: It is likely that these autosomal DNA test-takers will share DNA with Merle: 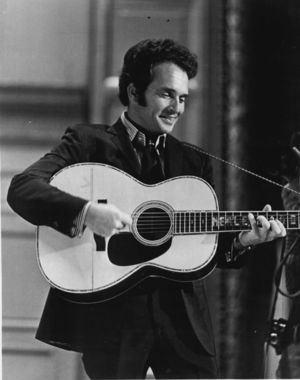 Elizabeth Winter
OK, now we can start with the other duplicate relations. In the merge, you chose the higher numbered parental profiles, thereby cutting them off from lots of other relations. We've got some more work to do before this duplication is corrected.
posted Dec 06, 2015 by Elizabeth Winter

Elizabeth Winter
Haggard-477 and Haggard-450 appear to represent the same person because: Whoops! Haggard-477 was created a few days after Haggard-450, so they need to be merged into one, and for database efficiency, the merge goes into the profile with the lowest number. Unless there's two Merle Ronald Haggards, both born in the 1930s, this is a duplicate profile. Also, FYI: You are pretty new here, so you might not know that for famous people, the red privacy setting, which excludes everyone else from seeing the profile's information, is not appropriate. Heck, you may not even know about editing privacy settings, or even that this profile got that red setting. (It's the default for the still-living.) Generally, privacy is open enough to be seen (one of those yellow or orange settings) for anyone who has a wiki page, who are known as "Notables" in WikiTree jargon. (Sorry if I'm telling you something you already knew.)
posted Dec 05, 2015 by Elizabeth Winter