New Zealand Herald 4th July 1917 page 8 : MR. S. HAGUE SMITH: A well-known citizen of Auckland in the early days died recently in Sydney in the person of Mr. S. Hague Smith. With his brother, Mr. John Hague Smith, the late Mr. Smith had a large hardware business in this city. They came from Grantham, Lincolnshire, England in the ship Mataoka, in 1859. When the Thames goldfields were discovered, the late Mr. Smith ran a service of steamers between Auckland and Thames, the two vessels employed for the purpose being the paddle steamers Duke of Edinburgh and the Prince Alfred. Some years ago Mr. Smith was the Sydney representative of the New Zealand Insurance Company. Until quite lately he was Sydney manager for the Colonial Mutual Fire Insurance Company.

A REMINISCENCE OF 40 YEARS AGO.

Mr. Hague Smith, manager of the Colonial Mutual Fire Insurance Company in Sydney, recalls for the benefit of "The World's News" the transporting of the "Maori Chief" from Onehunga to Auckland 40 years ago. The vessel Mr. Hague Smith told the reporter, was named the Maori Chief and was a stern-wheeler built to draw only lft. of water. She was originally the property of a commissariat contractor, and had seen three of four years' service on the Waikato River. At the close of the war the contractor left the country without giving his creditors any intimation of his intention. Mr. Hague Smith who was at that time in a large way of business in Auckland, and whose ledger account against the contractor was a pretty heavy one, determined, if possible, to retrieve something from the wreck of a shattered estate. Armed with the necessary authority he had the Maori Chief seized at her moorings at the Waikato Heads and towed into Onehunga. The opening of the Thames gold-field gave Mr. Smith the idea of employing the steamer in that direction and he decided to have the craft taken overland to Auckland. Despite the difficulties in the way, Mr. James Mackie thought out a method of overcoming them all. He fitted up a kind of improvised timber float about 80ft. long, with massive axle arms and three pairs of very strong wheels, the tyres of which were about 10in. wide. Boiler engines, stern wheel paddle, and other movable parts were taken out and the hull, etc., something like 100 ft. long, was, by the aid of hydraulic jacks and other contrivances, mounted on to the lorry. Horses could not be procured which would pull sufficiently steady to move the ponderous load. Mr. Hague Smith was not dismayed, and calling to his aid Mr. John Smyth, a Waitemata sawmiiler, arranged with him for the transport of the steamer to Auckland by means of a bullock team. Thirlyfive bullocks were soon hauling at the lorry and their steady effort had the desired effect. Then was seen the unusual spectacle of an iron steamer being dragged bodily along the high road, and although progress was necessarily slow, still it was progress. The second day, at 4 o'clock in the afternoon, saw the carriage and steamer in Pitt Street, Auckland, and before sundown the steamer reached Custom Street without any serious mishap, and she was immediately launched in the Waitemata. A month later she was converted into a paddle steamer, ready for the river and did good service on the Thames for a number of years as a tender to the Royal Alfred, a steamer that was subsequently purchased by the Port Jackson Steamship Company, and was extremely popular on the run between Sydney and Manly.

The description below, of the “Royal Albert” was written on the occasion of the retirement of Captain Farquhar: Thames Star 28th July 1913 page 4 [2]

"In I868, just twelve months after the Thames rush broke out, Captain Farquhar had command of the steamer Royal Alfred, running down to the land of gold from Auckland, and he has remained in that trade ever since—forty-five years on the 12th of next month, a length of service which must surely constitute a world's record in one run. The Royal Alfred was a boat of about 120 feet in length, and was built by Beddoes at the North Shore (Auckland) her engines being those taken out of the Prince Alfred; a name, by the way which recalls the Consort of the late Queen Victoria. The vessel carried between 300 and 400 passengers, and could do the journey in 3 & 3/4 hours."

By 1870 the "Duke of Edinburgh" had joined the "Royal Alfred on the almost daily run to Grahamstown (now Thames) and the "Go Ahead" was servicing Whangarei and the Bay of Islands. Samuel Hague-Smith also provided a monthly coastal service to the Kaipara with his ship "Prince Alfred" [3] His business premises were in Lower Queen Street, Auckland.

Mr S. Hague-Smith was once upon a time a rather long time ago— one of the leading merchants of Auckland (went bankrupt in 1871) In the days when copper tokens were current coin of the realm, those bearing the effigies of Mr Samuel Hague Smith made his personality almost as familiar in Auckland as that of the Queen herself. He is now resident manager at Sydney of the Colonial Limited Fire Insurance Company, and appears to be highly popular there. He completed his 70th year on April 21st last, and the leading mercantile and insurance men of the place celebrated the event by entertaining Mr Hague Smith at luncheon at the Cafe de Paris.

Ohinemuri Gazette 4.7.1917 Mr. Hague-Smith who at one time was, with his late brother Mr. J. Hague Smith, one of the best known of Auckland’s leading hardware merchants, died recently in Sydney. 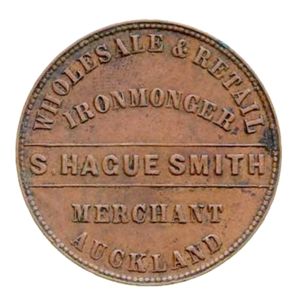