According to census records, Great Grandfather William Manoah Hall was born to John Hosey Hall and Nancy Rickles in 1862 in Indiana.[1] His Grandson Jasper "Coon" Hall told me the birthplace was in Fort Wayne. Noah followed in his Father’s footsteps and became a chimney builder. They say he once built a chimney that had 8 fireplaces in it. I've been told that several chimneys that he built are still in existence in Hollywood, Alabama and in Rounds Cove near Anderson, Tennessee in Franklin County. His nephew, Troy Bellony, identified one for me near Hollywood and I collected several bricks that had fallen from it during the past years. Noah’s first marriage was to Mary J (Chavis/Chavers/Shavers) on November 29, 1883 in Franklin county Tennessee.[2] Noah and Mary’s children were

Noah's children tell me that he was a good God fearing man and raised his family in that manner. His son Uncle Coon said he predicted one morning to his wife Nervy that Uncle Coon would be a preacher. The prediction became true later, but not before he died May 30, 1912.[4] He died about a half of mile east of Belfonte from pneumonia and was buried in the Old Baptist Graveyard in Hollywood, Alabama.[5] Belfonte, Alabama was a former county seat of Jackson County and does not exist anymore. 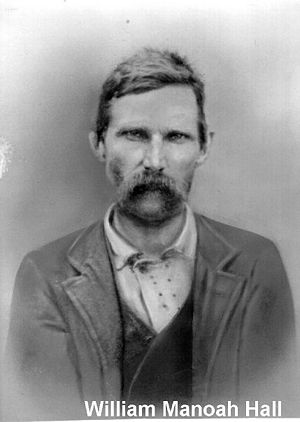