Dr. John Hall "was one of the eleven children of William Hall (d. 1607) of Carlton, Bedfordshire, also a medical practitioner," according to the new Oxford Dictionary of National Biography.

In the original profile of Dr. John Hall published in the 1890 Dictionary of National Biography (Vol. 4), biographer Sidney Lee notes that "he seems to have been connected with the Halls of Acton, Middlesex, though he was not born there."

Lee says Dr. Hall once owned a house and some property at Acton.

"He was well educated, travelled abroad, and acquired a good knowledge of French," says Lee. "He called himself Master of Arts, but his university is not known, and, although he practiced medicine, he had no medical degree."

Citing the University of Cambridge's Alumni Database, Wikipedia notes that John Hall and one of his brothers studied at Queens' College, Cambridge from 1589, receiving a B.A. in 1593 and a M.A. in 1597.

The first record of John Hall's appearance in Stratford-upon-Avon is the record of his wedding to William Shakespeare's daughter, Susanna, dated 5 June 1607.

After their marriage, Hall settled down in Stratford and began to practice medicine there. "His first house there was apparently in the street called Old Town," says Lee.

The Hall family's only recorded child, Elizabeth, was baptised on 21 February 1608 at Holy Trinity Church. It should be noted that several Hall family genealogies claim there were other children. See for example the strange family tree posted by Joyce A. Tucker on Rootsweb here.

In 1612, John Hall leased a small piece of wooded land, possibly as a new home for his family.

"Hall appears to have had a close relationship with his father-in-law," says Wikipedia, "as they are recorded being in agreement with each other over a local issue regarding enclosure in 1613. They are also known to have travelled together to London on business in 1614."

Hall soon "obtained great local eminence as a doctor," says Lee. "More than once he attended the Earl and Countess of Northampton at Ludlow Castle, more than forty miles from Stratford."

It is believed that Dr. Hall and his family moved into their Stratford home, Hall’s Croft, as soon as it was built in 1613. Hall's Croft is now a museum, open for public viewing.

The rapid acquisition of this position and property appears to have inspired some jealousy amongst local workmen.

In June 1613, a man named John Lane, Jr., 23, accused Susanna of adultery with Rafe Smith, a 35-year-old haberdasher, and claimed she had caught a venereal disease from Smith.

"As a notable Puritan of the community," says Wikipedia, "John Hall supported the Puritan vicar, Thomas Wilson, against whom Lane would later participate in a riot, and it is possible that Lane's charges had political motives in defaming Susanna.

"On 15 July 1613 the Halls brought suit for slander against Lane in the Consistory court at Worcester. Robert Whatcott, who three years later witnessed Shakespeare's will, testified for the Halls, but Lane failed to appear. Lane was found guilty of slander and excommunicated."

After William Shakespeare's death in 1616, Susanna (Shakespeare) Hall inherited her father's home, known as New Place. She and her husband moved into the house in the summer of 1616.

"In June of 1616," says Lee, "Hall proved the will in London, in the Archbishop of Canterbury's registry. Hall and his family removed to New Place soon afterwards."

Shakespeare scholars have also noted, with great interest, that John and Susanna (Shakespeare) Hall inherited all of the esteemed playwright's books and manuscripts. How they chose to dispose of those (now priceless) manuscripts is a subject that continues to exercise the imaginations of many acquisitive antiquarians.

In March of 1617, Hall became the attending physician for Lord Compton, "probably at Compton Wyniates, Warwickshire. Hall was elected a Burgess [mayor] of Stratford in 1617, and again in 1623, but was excused from taking office on the ground of his professional engagements."

Hall's daughter Elizabeth "married, in April 1626, Thomas Nash (1593 - 1647), a resident at Stratford who was a student at Lincoln's Inn [the law courts of London], and had considerable property."

In 1632, Hall had become "seriously ill" but recovered. His new role as the vicar's churchwarden almost immediately put his feeble health under new stress.

"The vicar, Thomas Wilson, an ardent Puritan and Hall's intimate friend, induced him to join in a chancery action brought by himself against the town council. Hall was already engaged in disputes with his fellow-councillors. In October 1633 they expelled him from the council, on the ground of his breach of orders, 'sundry other misdemeanors' and 'for his continual disturbance of our halles.' "

John Hall reportedly passed away on 25 Nobember 1635, and was buried next day in the chancel of the parish church.

It is interesting to note that in early 1636 a large expedition of Puritans, led by Dr. Thomas Greene, left Wiltshire for the Massachusetts Bay Colony in America, on board the good ship James.

The American Hall families who claim descent from John Hall, husband of Susanna (Shakespeare) Hall claim that Dr. John Hall did not die. Rather, angered by the local council, he chose to leave for America, where he died at Middletown, Connecticut, many years later, on 26 May 1673.

In either case, Hall's family -- widow, daughter, and son-in-law -- certainly continued to live at New Place.

"By a noncupitive will," says Lee, "he left a house in London to his wife, a house at Acton and a meadow to his daughter, and his 'study of books' and his manuscripts to his son-in-law, Thomas Nash. The manuscripts were to be burnt or treated as the legatee pleased."

At least one of those manuscript's, Dr. Hall's own work, later titled Select Observations on English Bodies: Or, Cures both Empericall and Historicall, performed on very eminent persons in desperate diseases was published in 1657, and survives to this day.

What Thomas Nash chose to do with the Shakespearean manuscripts in his possession is a deeper mystery. It is very possible that some of them were used as kindling for a winter fire.

Thank you to Quentin Smith for creating Hall-10505 on 21 Sep 13. Click the Changes tab for the details on contributions by Quentin and others. 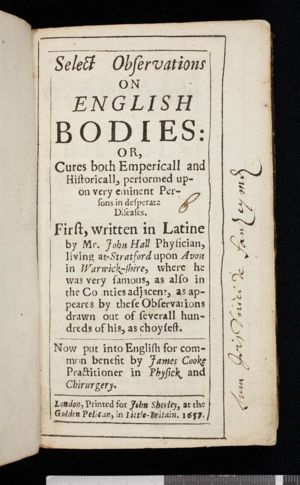 John is 22 degrees from Danielle Liard, 16 degrees from Jack London and 10 degrees from Henry VIII of England on our single family tree. Login to find your connection.