This man lived. This is about all there is to say, because there is no proof of his existence other than a Widow and her four children living in Rabun County Georgia in 1840.

A yet unconnected nugget is that there was a preacher from Burke County, NC, named Humphrey Posey, who was connected to the Burke County Halls, who ended-up in North Georgia at the same time - Was Humphrey Posey Eller named for this Preacher?).

Another clue, From Goolie Dillard Sorrells is that his father was a preacher named James and James was from NC.

More research, a turning over of these leaves, may yet show us who he is.

The man in this profile is unknown. We know that his father's name was probably James and that he was a preacher from NC from a 1955 handwritten note of Goolie Dillard Sorrels who was Nancy Hall Welborn's grand daughter. This note was sent to Eunice Dean Lord by her mother Nola Dillard Lord.

Not from Burke County, NC

Not From Cherokee County, NC

The Cherokee County Halls have been connetced to the Rabun Halls through online, unsourced genealogies, based on the grave of James Hall (son of Ann Hall who married Spicey Teem in Rabun County, GA) who is buried in TN. James Hall, from Cherokee never lived in Rabun County Georgia. John Hall ( father of James Hall from Cherokee, NC), Balfron, Stirlingshire, Scotland, b. 1800, d. 1880 in Cherokee, North Carolina, United States would have been only 16 years old at the birth of the man in this profile. It isn't out of the realm of possibility but unlikely and now unproven given that the Halls in Cherokee are related to the Halls in Burke.

...the widow Ann Hall (appears) on the 1840 Rabun Co.census for Ga. The John Hall on pg. 216 (of this census) is maybe a brother in law. Here Ann has 3 children. A son that I believe is my grgr grandfather James Hall (no proof), the two girls are maybe Nancy and a sister possibly the wife of Humphrey Posey Eller, Mary Jane. ...we have a Nancy Hall married to Wiley Welborn...Ann Hall is listed as staying with Jane Hall and Posey Eller on the 1850 Union Co. Ga. Census and Posey Eller on the 1860 TOWNS CO. Ga. census... My grgr grand parents James and Spicy Elvira moved and settled in Polk Co. Tenn by 1860.[1]

Also in reading the book, Sketches of Rabun County, the early pioneers who moved into the area of Rabun were mainly from the Buncombe County, NC area.[2]

1850 Census of Rabun County, GA, shows a Posey M. Eller living next door to a Julia A. Unknown Hall Family.[3]Image of document

Is Unknown your ancestor? Please don't go away!

ask our community of genealogists a question.
Sponsored Search by Ancestry.com
DNA Connections
It may be possible to confirm family relationships with Unknown by comparing test results with other carriers of his Y-chromosome or his mother's mitochondrial DNA. However, there are no known yDNA or mtDNA test-takers in his direct paternal or maternal line. It is likely that these autosomal DNA test-takers will share some percentage of DNA with Unknown: 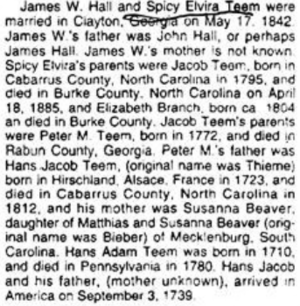