Agnes Kate (known as Kit) was born in 1889 at Colemore in Hermitage Cottages. She was baptised at Priors Dean Church and was the eldest of Alice and Samson Hall's children. She seemed to inherit many of her mother's ways and was strong-willed. She led an active life.

Doubtless she attended the local school at Froxfield. but there is no evidence or record of this. Like almost all other girls she went into service when she left school until she married at the age of 21. Her first marriage was to James Browning on 18 January 1910 at High Cross church. James was born in 1885 and gave his vocation as a Fitter on the marriage certificate. He died just before the outbreak of the First World War, after they had had two children, James (junior) and Phyllis (known as "Molly"). In later years, Molly owned a wool shop in Fareham. She died in 1979. James (junior) joined the Royal Marines and after he was demobilised he joined the Southern Railway, working at Tisted station where he eventually became the Stationmaster. He had married May but he died in 1981 and was buried at Alton. His wife lived on at Greenfields Avenue.

Kit married for the second time in 1915, to Ernest Edward Harfield. Harfield had been a sergeant in the Army Service Corps a forerunner of the Army Catering Corps and he had been a master baker. He set up a bakery at Trooper Bungalow as the place was called, next door to "The Trooper Inn"" having bought the property in 1909 from Tew. a motor engineer from Southampton. Harfield delivered the bread around the district.

Kit and Ernest had two children, Ted (born in 1917) and Joan (born in 1926). Sadly Harfield (senior) was killed in a road accident in 1926 when, outside Barrow Cottage in Staple Ash Lane his motor cycle skidded from under him and crashed. Petrol leaked from the machine came into contact with the hot engine and ignited. Harfield was wearing a heavy coat and its belt got caught on the machine. He received fatal burns and was buried at High Cross. Kit set about re-arranging her life. She gave birth to Joan on the 17th July and looked for ways to keep her home together by taking a job as Postmistress to pay off the three remaining years of the 20 year mortgage. The front room was devoted to the distribution of mail, being delivered from there on bicycle by Percy Chaplin. Percy William Chaplin had also delivered Harfield's bread and got the job of postman working for Kit. He proposed to her and was accepted in 1929. He was born in 1900 and there is a photograph of him with his distinctive Post Office hat on and his bicycle. standing in the garden of Trooper Bungalow. Percy and Kit were married at High Cross church. Harfield (junior) had joined the Royal Navy and may have caught TB whilst in India as a torpedo man but he was invalided out of the navy, dying at Trooper bungalow in 1946 aged 29 years. In 1946. Joan had married Reg Griffiths who was in the RAF Regiment, at High Cross. He had been born in l921 in North Wales where they went to live, at Mold.

Percy and Kit had one child, Joy, born in 1931. She married Albert F Taunton in 1949. Bert was born in 1919 and he and Joy lived at Trooper Bungalow until, in 1973, they had the timber structure demolished and in it's place built a modern brick bungalow which they called Pendaryn. Kathleen and Donald bought this off them in 1976 and promptly renamed the place Four Winds. Bert and Joy went off to live in Petersfield at a guest house they were keeping in Charles Street. From there they went to live for a few years in Australia, at Byron Bay until they returned in 1990 to live in Petersfield.

Kit had died in 1942 aged 53 years and she was buried at High Cross on 25 September. Her husband Percy and Joy, had been left the timber bungalow and Percy married a widow Elizabeth Edwards. When Ben & Joy rebuilt the property they created a flat" at the rear for Percy and Lizzie to live in.

Lizzie died at the age of 74 and was buried at High Cross (row 25 plot 8) on 10 Feb 1975. Percy went to Petersfield to live at the guest house until Joy and Bert went to Australia. He then went to live in an old people's home at Gloucester House in Petersfield but he died in the King Edward VII Hospital at Midhurst in January 1985 Bert died in 1996, some years after his return from Australia.


Memories: 1
Enter a personal reminiscence or story.
Tony Hall
I knew her as Aunty Kit.

She had two daughters - Joy & Joan I believe. She ran the Post Office in Froxfield.

posted 28 Sep 2009 by Tony Hall
Login to add a memory.
Is Kit your ancestor? Please don't go away!

ask our community of genealogists a question.
Sponsored Search by Ancestry.com
DNA Connections
It may be possible to confirm family relationships with Kit by comparing test results with other carriers of her ancestors' mitochondrial DNA. However, there are no known mtDNA test-takers in her direct maternal line. It is likely that these autosomal DNA test-takers will share some percentage of DNA with Kit: 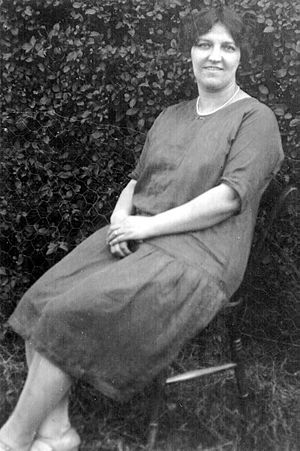