Father of Olive (Hall) Stacey and Bessie Hall
Died 1918 at about age 27 in Arras, France

ROBERT ALFRED HALL b. 1890 d. 1918 Robert, the second child of Samson and Alice Hall, was born in 1890 and baptised at Priors Dean church on 22 June 1890. As a youth he was a great wood "whittler" with his knife. He amused himself by carving wooden figures and a box still exists which he embellished with his carving, having got a Cadbury's chocolate box from the lady at The Trooper Inn. There is no record of which school he attended but it was almost certainly Froxfield School with his older sister, Agnes. When he left there he went to work with his father at Claypits and learned from him how to handle horses.

In 1911, he proposed to a girl from Rogate in Sussex, called Ivy Kate Hickman and they were married in that year at Rogate church. The Hall family is said to have walked from Froxfield for the wedding but it seems conceivable that they may have borrowed a horse and cart. However, it was a long way, so they were invited to spend the night at the Hickman's house at Nyewood, which backed directly on to the railway between Petersfield and Midhurst. Evie, then 9, relates how when the children were all put to bed in the same room upstairs, Frank Hickman, whom Evie was to later marry got out his penknife and removed a knot of wood from a floorboard. They then took it in turns to watch the grown ups enjoying themselves downstairs at the wedding reception. After they were married. Robert and lyy moved into Old House at Froxfield which by then had been vacated by Robert's grandmother Fanny.

During the First World War, Robert volunteered for the Army, as did his brother Samuel William. Robert had a good physique and 29258 Private Hall, RA joined the 3rd Btn of the Grenadier Guards. It was only towards the end of the war that the Guards Regiments reclassified their private soldiers as "Guardsmen". In a photograph, Robert is shown in Sgt Woods' squad and, since his cap has a full peak it is likely that the picture was taken soon after his enlistment for guardsmen later have the peak of their cap trimmed back so that, when they have to keep their heads up and back, they can see. Supposedly this encouraged an upright military bearing. The Grenadier Guards Depot at that time was at Caterham Surrey which is probably where the photograph was taken. Samuel had joined the Hampshire Regiment. Both were sent to France. Robert received fatal wounds and died on August 23rd 1918, barely three months before the war was to end. Samson had died in 1917 and Sam had got compassionate leave in order to attend his father's funeral. The War Cemetery Register at Bucquoy Road, Ficheux near Arras states that Robert's next of kin was Ivy and she was living at Old House, Froxfield. It also records that Robert was amongst 8 Guardsmen originally interred at the Hamelincourt Cemetery but "on concentration" his body was removed to Bucquoy Road, Details of his grave are shown in some photographs taken when his grave was visited in 1984 His name is include on a tablet in High Cross church "In Memoriam". Robert was in his twenty-ninth year when he died.

Now widowed, Ivy was bringing up their two children, Olive Kate (Kit) and Bessie, on her own. In 1922 (March qtr 1922 Petersfield 2c 283) Ivy re-married to George Hodges. In 1931, Olive Kate (Kit) married Reg Stacey at Froxfield and they farmed a smallholding at Four Marks near Alton. When Kit (Olive) died, in the eighties, Reg Stacey married a widow from Froxfield called Nellie Guy. Reg disposed of his smallholding at Four Marks and moved into Nellie's holding at Froxfield, called Spencer's Barn in High Cross Lane. At one time this house had been occupied by Mr A J Simpson who, in 1945, had been the Postmaster having taken over this role from Auntie Kit and Percy Chaplin. Nellie died in 1995 and was buried at Froxfield Green.

Bessie, the second of Robert and Ivy's 2 daughters, was married in 1936 (March qtr 1936 Petersfield 2c 285) to Stanley George Tegg who came from Steep. 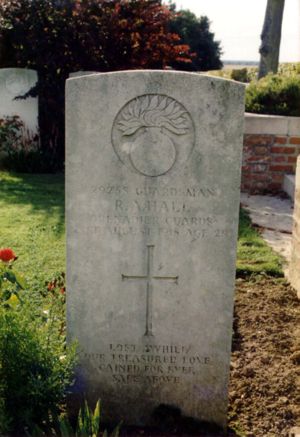 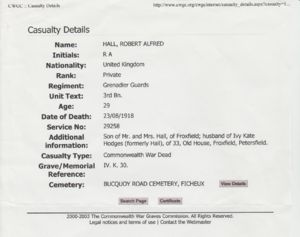