Olive was born on the 24th March 1898 probably at Hermitage Cottage, Colemore. Alice had come to Froxfield in 1887 and had met Samson. The circumstances of their meeting are not known but they were married at Priors Dean Church on October 28th 1888. Samson's parents were living at Church Farm Cottages, no doubt working for the Tichborne Estate and Samson was given a cottage at Hermitage Farm, having employment on the same estate. There, Agnes and Robert were born and these children and their parents are mentioned in the 1891 census which was conducted towards the end of April that year. According to Olive's younger sister Eva, the family did not move into Hall Place until about 1905 after a short period of living at Alexanders. Eva herself was, she says, born at Claypits, in 1902. For Samson to move from Hermitage Farm to Claypits, across the Alton road means that he changed his employer - from the Tichborne Estate to the Nicholson estate. Samson's father, William, had died in 1900, his widow, Fanny, had moved out of Church Farm Cottage and temporarily moved into Hall Place herself. However she moved on to Old House after a year or so and Hall Place was renovated for Samson and Alice's family. It is possible that upon William's death the whole Hall family decided to change employment to Nicholson. Much about their whereabouts at that time will be revealed when the results of the 1901 census are published in the year 2001

Olive attended Froxfeild School during the period when Mr Alfred Pike was the Head Teacher (1884 -1905) and he was succeeded by Mr George Gardner 1905 - 1910. Mr Arthur Elson then became the Head 1910-1915. Olive was there from 1903 to 1911. After she left school she went into service, which was the usual practice with young ladies, and secured herself a position 'living in' at Guildford, nearly thirty miles away. She worked at a large private house called "The Lair", in Abbotswood. This is still a private estate of houses on the north-east edge of Guildford bordering the London Road. Robert wrote to Olive there in June 1918 sending her a card from France, a pre-printed card with a number of optional statements on it which the writer had to cross off to leave the message; this was to satisfy the army censor. In this case, Robert had not crossed out the line "Letter following". We do not know the contents of that letter but, barely two months later, Robert died from wounds received and is buried in France.

Olive met James Archibald Neller at Froxfield and they were married at High Cross on June 12th 1920; the Rev A Swainson-Carr conducted the ceremony. James (known as "Arch") was 26 (b. 1894) and gave his vocation as Gamekeeper, Olive was 22 years of age and gave no vocation, probably indicating that by then she had given up her position at Guildford and returned to Froxfield. At the reading of the Banns beforehand in High Cross Church she is referred to as "a spinster of this parish". The wedding reception was held at Olive's mother's house at Warren Corner, known today as Holly Cottage, and the couple lived for a short period at Arch's parent's old house at Colemore, called Keeper's Cottage, his parents having moved up to Barnetside Cottages, Froxfield.

The following year, Arch and Olive moved up to Warren Corner themselves. It is known that the house in which they were to eventually live was not ready for them, it was being renovated, and Winifred, their first child says that she was actually born in the house on the other side of Holly Cottage, known today as Garryowen. When they did move into the house known today as Southernwood, they were to live there for the rest of their lives.

Olive and Arch lived a fairly uneventful life at Froxfield. She worked hard to bring up a large family on a farm worker's wages when Arch worked for many years at Phillips' farm at Field Farm, Colemore, working long hours and he was eventually, joined there by both of his sons David and Geoffrey.

In 1951 Geoffrey tired of farm work and left to work for a short time at Rotherfield Park the estate of Sir James Scott at East Tisted. Having left an "essential occupation" he was promptly called up for National Service in the army and served two years at many places around the world.

When he returned he joined Bailey's Nurseries at Petersfield and became proficient at building ornamental walls and paving, eventually going into business on his own when Bailey's closed down in 1991. Geoffrey married Ann from Petersfield and they had three girls Alison, Karen and Josephine, followed by a boy Jonathan.

David also married, a girl called Georgina from Gosport and they had two boys Paul and Robert. In 1973, David and Geoffrey expanded their parents home of Southernwood and made two separate houses out of it, each living there until Geofrey and his familv moved down to Petersfield in 1988.

Winifred was the eldest of Olive and Arch's children. She, like the others attended Froxfield School but unlike the younger ones she spent her entire school life at Froxfield. In later years, when they reached eleven, all Froxfield children graduated to a larger school at Petersfield. However, at the time, when Winifred reached fourteen, she left Froxfield school and went into service in Dr Young's house in Froxfield. Later, Winifred met Robert Etherington an apprentice to Edward Barnsley between 1931 to 1940 at his workshops in Cockshott Lane, Froxfield. Barnsley's work is world famous and followed the school of the designer William Morris. Robert lodged for a time at a house on the corner of Honeycritch Lane, with a family called Barnet, whilst he did his apprenticeship as a cabinet maker. His family came from Portsmouth. Winifred was called for essential service during the war in 1941 when she was 20 and went to lodge at Portsmouth where she learnt to be a panel beater. Her friendship with Robrt flourished and they were married at the Register Office at Portsmouth in about 1942. Robert too was on war work making Mosquito aircraft which were of all wood construction. He went with the factory when it moved to Christchurch and Winifred went with him. They set up their first home in a rented bungalow in Stroud Park Avenue, at Purewell. After the war. Bob returned to coach building and they moved to Paulsgrove. They later moved to Waterlooville where, in the early sixties, Robert had a heart attack and died. He was buried there in the cemetery. They had two children, Raymond b 04/07/1943) and Valerie b 1945.

Finally, the last of Olive and Arch's children to be mentioned is Kathleen. She met Donald Henry Compton from Morden, Surrey in Petersfield whilst he was serving with the Royal Engineers at the Railway Training Centre at Longmoor in 1945. They married at Froxfield on 12 July 1947 and had three children, Susan Jane (b 1949). Robert John Richard (b. 1953) and Claire Louise (b. 1958). Susan had a tragic road accident whilst driving herself to work on November 5th 1969 from which she died. Her body was brought back to Froxfield and was buried at High Cross and the space next to her was reserved for Donald and Kathleen. Robert met a girl called Lorna Fletcher (b.1958) from Ropley and married her in 1973. They have four children Katharine (b 1980), John Alexander James (b. 1982), Felicity (b 10 09 87) and Hugh (b: 26 04 93). Claire married David Richardson on her eighteenth birthday on 20 November 1976 but divorced him after giving birth to Jennifer Claire on 12 April 1978. She then married Garry Anthony Applin in 1983 at Alton Register Office subsequently giving birth to Samantha Louise in 1984. However Claire divorced Garry in 1990 and now lives with Stephen Lowe at Guildford. They were both Probation Officers but in 1995 Claire applied for and got an Approved Social Worker's position from which she has progressed to a managerial post in Surrey's Social Services Department.

Olive died in her 67th year in 1965 and was buried on 21st January at High Cross churchyard, next to her husband Arch who had died in 1962 on 19 March

Is Olive your relative? Please don't go away!

ask our community of genealogists a question.
Sponsored Search by Ancestry.com
DNA Connections
It may be possible to confirm family relationships with Olive by comparing test results with other carriers of her mitochondrial DNA. However, there are no known mtDNA test-takers in her direct maternal line. It is likely that these autosomal DNA test-takers will share some percentage of DNA with Olive: 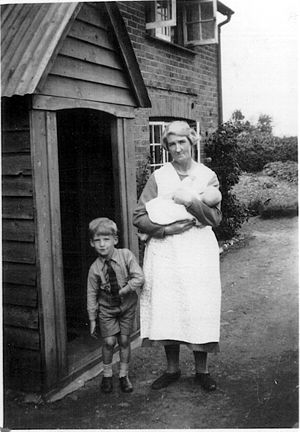