Eva. known as Evie. was born at Claypits Farm, Froxfield on 31st March i902 She recalls how their home, Hall Place, was being renovated when she was about three years old and the family was living temporarily at Alexanders across the fields. When they moved back into Hall Place, she was playing in the wood shed at the rear which had been used by the workmen and was full of wood shavings. These covered her clothes and caused her to receive the wrath of her mother Alice for soiling her clothes.

Evie started school after Easter in 1907 during the period of 1905-1910 when Mr George P Gardner was the Head Teacher at Froxfield School. Later Mr Arthur S Elson was Head Teacher during the period 1910 to 1915. This was at the same time as Amy Neller was at the school and who was later, in 1920, to become a sister in law. as Evie's sister Olive's husband's sister. Evie had a school photograph which showed them both in the same group but it has not been possible to copy that picture.

Evie did not much enjoy life at school and related how she had to walk long distances in all weathers to get to school from Hall Place. She also related how. with her sister Olive they had to walk the lanes oi Froxfield collecting and delivering washing taken in by her paternal grandmother who lived at Old House and had to make a living for herself after her husband William had died in 1900. They also had to bring their father's boots up to Warren Corner for repair by a club-footed shoe repairer who lived in Warren Corner Cottages, in a house now occupied bv the Treagus family. In the 1891 census there were several tradesman listed in Froxfield as "Cordwainers". who were leather workers, expert in saddles as well as boots and shoes.

Evie found life no better when she left school at 14 years in 1916 and obtained employment in service living in at Ashford Chase, a large house near Steep later- owned by Lord Horder. Physician to the King. At Ashford she met another employee named Frank Hickman, a gardener there, who had returned from the army after the First World War. Frank was not unknown to her, for he had an elder sister Ivy who had married Evie's older brother Robert at Rogate in 1911. Frank Hickman had been present at that wedding, as had Evie, then 9 years old. Now Frank proposed to her, in 1919, which she readily accepted. This would enable her to break free of life at home. just after the death of her father Samson in 1917 and whom she had loved dearly. By then her mother Alice had remarried, a George Andrews but Evie required her parents permission to get married at an age under 21 years and this was readily given. She was married at 17 years of age at High Cross church. The Banns were read by the Rev H Bond on September 28th 1919 and again on the 5th and l2th October by the Rev Alan Swainson- Carr who married them on October l4th. 1919

Frank. who was born in 1897, was a very accomplished gardener and was thought very highly of by his employer at Ashford. They were offered the tenancy of a house at the foot of Stoner Hill, called Upper Ashford Lodge and they stayed there until 1932 when Frank was given a good reference by his employer so as to take a new job at Thakeham, near Storrington in Sussex. During their period at Ashford they had four daughters, Peggy, Betty, Vera and Daphne (otherwise known as Dimps).

Frank was not happy at his new employment and eventually secured further employment with Goachers (Nurserymen) Ltd. nearby, where he worked hard to save enough money to buy from Goachers a small cottage, and the one next door, Nos 6 & 5. London Road, Washington. Sussex then located on the main London Road from Worthing but are now by-passed by a dual carriageway at the back of Montpelier Cottages under improvements to the A.24 road. There they all lived quite happily for more than fifty years until. in the eighties. Frank became ill and took to his bed. When his condition worsened, he was admitted to hospital where. after two weeks and at the age of 87 years. he died in March 1985 He was cremated at Worthing Crematorium. Naturally, Evie was upset after living happily together for nearly 67 years but she carried on living at Montpelier Cottages. Frank was a most interesting man for he had served in the army during the first war in Mesopotamia and was quite knowledgeable. Although he had only one good eye, he was a crack shot with a rifle and won many prizes and several medals at a rifle range then located in the twenties behind The Slade in High Cross Lane at Froxfield. He was also a collector. having much memorabilia and books he had acquired. Indeed, he encouraged me to start collecting coins in 1969. He also had a habit of writing down any useful bit of information he heard. often on a pad of paper which he kept by his chair and sometimes on the fly-leaf of a book which might be handy

Earlier in 1938, Evie's mother Alice had lost her second husband George who died at Woodfield Cottages in Froxfield and Alice was left alone. Her daughter Olive could not take her in and so, in 1945, she was invited to occupy the cottage at No 5 Montpelier Cottages, next door to Evie and Frank Roughly opposite, in some council houses lived Alice's youngest son Jack and his wife Madge, with their family.

The whole group lived seemingly happy, until Jack announced that he and his family would be emigrating to Australia, as had his niece, Evie's Vera, some years before

Some five years later, Evie and Frank wanted No 5 for their daughter Dimps and Alice moved on to live with her son Samuel William at Coulsdon in Surrey where he had taken a job as a gardener with the Bethlehem Royal Mental Hospital and was living with his wife, also called Evie. Alice died in 1953 and was buried there.

When in 1985 Frank had died, Evie lived on at No 6 Montpelier continuing the hard way of life to which she had always been accustomed. in a cottage with no running hot water and no inside bathroom or toilet. Her daughters bought her some comforts and a television set which she promptly put out as superfluous to her radio. She continued to keep the garden of about half an acre in immaculate condition with not a weed anywhere and many pretty flowers and vegetables. She was not fit however, and had to be admitted to hospital herself. When she was discharged, she was persuaded to leave the cottagee and went into several nearby nursing homes for the elderly, the first being a Gardeners, Benevolent Home and the last being Formead in Meadow-lands at Storrington. Dimps moved out of No 5 into a council flat which she was offered and both cottages were sold and modernised by a developer. Her daughters are still alive, all of whom are married. Vera Hargreaves is in Australia but not well, Peggy still lives in Scarborough, Yorkshire, Dimps is in Worthing and Betty who had always lived nearby with her husband Colin Daughtrey at Findon Sussex, looking after her mother's welfare. When, on March 3lst 1995 Evie reached the rich age of 93 years she became the oldest surviving member of her family.

On the 19 September 1995. while at Foxmead her health suddenly deteriorated and she was taken to Worthing Hospital at 1 20 pm. There she died at 6 pm. She was cremated at Worthing Crematorium on 26 September 1995 and then her ashes joined Franks in plot 2ii25

Is Eva your relative? Please don't go away!

ask our community of genealogists a question.
Sponsored Search by Ancestry.com
DNA Connections
It may be possible to confirm family relationships with Eva by comparing test results with other carriers of her ancestors' mitochondrial DNA. However, there are no known mtDNA test-takers in her direct maternal line. It is likely that these autosomal DNA test-takers will share some percentage of DNA with Eva: 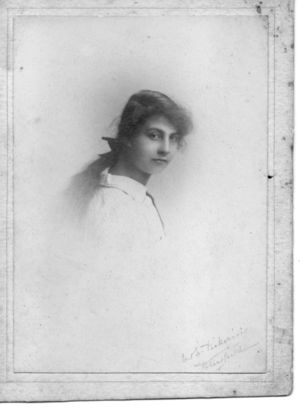 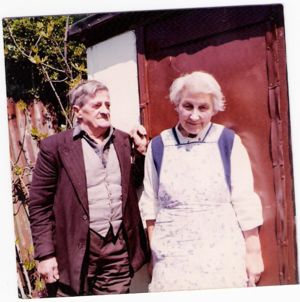