Fleet Admiral William Frederick Halsey, Jr., GBE (commonly referred to as "Bill" or "Bull" Halsey), was an American Fleet Admiral in the United States Navy. He led the World War II Pacific Allied forces over the course of the Doolittle Raid, the Battle for Guadalcanal and the fighting up the Solomon chain. Later he was made commander of the Third Fleet, commanded actions from the Philippines to Japan. On December 11, 1945, he took the oath as Fleet Admiral.

Halsey was born in Elizabeth, New Jersey, on October 30, 1882, the son of US Navy Captain William F. Halsey, Sr.. His father was a descendant of Senator Rufus King, who was an American lawyer, politician, diplomat, and Federalist candidate for both Vice President (1804, 1808) and President of the United States (1816).

While at the University of Virginia he met Frances "Fan" Cooke Grandy (1887–1968) of Norfolk, Virginia. After his return from the Great White Fleet circumnavigated of the globe and upon his promotion to the rank of full lieutenant he was able to convince her to marry him, on December 1, 1909 at Christ Church in Norfolk. Fan developed manic depression in the late 1930s and eventually had to live apart from Halsey. The couple had two children, Margaret Bradford (October 10, 1910) and William Fredrick Halsey Jr (Sept 8, 1915).

Halsey died on August 16, 1959 while holidaying on Fishers Island, New York. After lying in state in the National Cathedral in Washington D.C he was interred on August 20, 1959 near his parents in Arlington National Cemetery. His wife is buried with him. 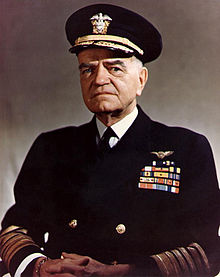