James Hamilton was a member of the aristocracy in British Isles.

James Hamilton, was born on 5 July 1724, the only child of James Hamilton, 5th Duke of Hamilton, and his first wife, Lady Anne Cochrane.[1] and was baptised the following day at Canongate Church, Edinburgh.[2] He held the courtesy title of Marquess of Clydesdale from birth.

James Hamilton is described as "a man of letters could he have kept himself sober"[4] and "hot, debauched, extravagant and ... damaged in his fortune and person".[5] He seems to have fallen passionately for Elizabeth Gunning, the beautiful but penniless second daughter of Colonel John Gunning, of Castle Coote, county Roscommon, Ireland, and his wife, Hon. Bridget Bourke, when he met her at a masquerade ball at the King's Theatre in Haymarket on 16 or 18 January 1752.

About 4 weeks later, on 13 February, while her mother and sister were visiting Bedford House "he found himself so impatient, that he sent for a parson (possibly Andrew Trebeck), who refused to perform the ceremony without licence or ring: the Duke swore he would send for the Archbishop - at last they were married with a ring of the bed-curtain at half an hour after twelve at night [on 14th February] at Mayfair Chapel" (St George's Chapel, Hyde Park Corner, where clandestine marriages without a licence or banns or consent of parents were performed.)[6]

James Hamilton died on 17 or 18 January 1758 at Great Tew, Oxfordshire, of a cold, caught while out hunting, and was buried at Hamilton in February 1758.[9]
Burial: Hamilton Old Parish Churchyard, Hamilton, South Lanarkshire, Scotland

THE MOST HIGH AND PUISSANT PRINCE Sir James Hamilton DUKE OF HAMILTON AND BRANDON  :AND CHATELHERAULT DIED AT _REAT REW AT OXFORDSHIRE 18TH JANUARY 1757
AGED 34 YEARS[1]

His widow, married secondly 3 February 1759 John Campbell, 5th Duke of Argyll, and had further issue with him.[10]

See also: The Wikipedia article for James Hamilton, 6th Duke of Hamilton but note that it does have some errors and doesn't cite any sources. 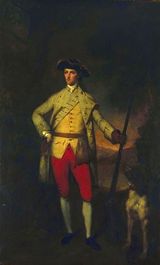 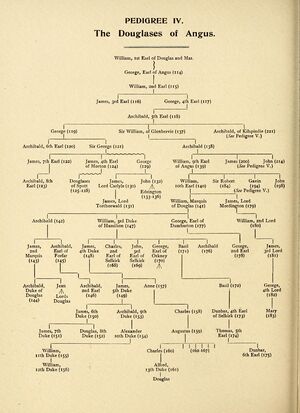 Leave a message for others who see this profile.
There are no comments yet.
Login to post a comment.
Gemma Rooney
Hamilton-10149 and Hamilton-10 do not represent the same person because: They are from different countries with different names and birth dates...
posted Aug 14, 2020 by Gemma Rooney

John Atkinson
Wikitree policy is not to copy from Wikipedia because they have different copyright licences see here http://www.wikitree.com/wiki/Copying_from_Wikipedia Consequently I have removed sections copied from here https://en.wikipedia.org/wiki/James_Hamilton,_6th_Duke_of_Hamilton and here https://en.wikipedia.org/wiki/Duke_of_Hamilton. In fact copying from any source is not encouraged http://www.wikitree.com/wiki/Copying_Text
posted Apr 15, 2016 by John Atkinson

John Atkinson
Hamilton-10125 and Hamilton-10 appear to represent the same person because: Obviously the same person, birth is 5 July not 10 July as in Wikipedia, and all other sources call him just James Hamilton, James George Hamilton is his son, again Wikipedia seems to be incorrect. Please merge making those corrections.
posted Nov 11, 2015 by John Atkinson