James (Hamilton) Hamilton Duke of Hamilton is a member of Clan Hamilton.

James Hamilton was a member of the aristocracy in Scotland.

James Hamilton was the 1st Duke of Hamilton.

Second English Civil War - Battle of Preston "..... defeated in detail by Oliver Cromwell during the three days 17–19 August 1648 at the Battle of Preston, being himself taken prisoner on 25 August. He was tried on 6 February 1649, condemned to death on 6 March and executed by decapitation on 9 March.[2]

He sided with King Charles I., and on 12th April 1643 the King created him DUKE OF HAMILTON, Marquis of Clydesdale, Earl of Arran and Cambridge, Lord Avon and Innerdale.

He married, in 1620, Margaret Fielding, daughter of William, Earl of Denbigh, who died 10th May 1638, having had: By his wife Mary Feilding, Hamilton, six children, of whom four died in childhood.

He was buried at Hamilton Old Parish Churchyard, Hamilton, South Lanarkshire, Scotland. This inscription is a Cenotaph for the family. Inscription:

THE MOST HIGH AND PUISSANT PRINCE James Hamilton, DUKE OF HAMILTON AND BRANDON  :AND CHATELHERAULT DIED AT _REAT REW AT OXFORDSHIRE 18TH JANUARY 1757
AGED 34 YEARS 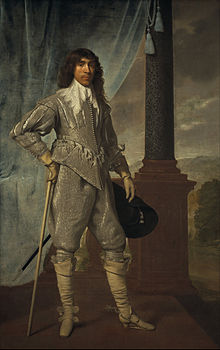