lands alienated by his father.

Born May 16, 1423 in Cadzow Castle, Lanarkshire, Scotland[citation needed] Illegitimate children included Sir Patrick Hamilton of Kincavil, father of Master Patrick Hamilton, burnt for heresy in 1528 and a Protestant martyr. Lord Hamilton also had a daughter who married Sir John MacFarlane, 11th chief of Clan MacFarlane. John Hamilton of Broomhill (d. c. 1550), another illegitimate child of James, 1st Lord Hamilton, was by Janet Calderwood. In 1512 John's birth was legitimized. His grandson, James Hamilton, notably served as Sheriff of Perthshire, and his descendants became the Lords Belhaven and Stenton. Another illegitimate child by Janet Calderwood was David Hamilton, Bishop of Argyll and commendator of Dryburgh Abbey.

James Hamilton was intimately connected with the powerful House of Douglas -- his mother was a daughter of the Douglas Lord of Dalkeith, and also through his marriage in 1439/1440 with Lady Euphemia Graham, young widow of Archibald Douglas, 5th Earl of Douglas and daughter of Euphemia Stewart, Countess of Strathearn. He was stepfather to the young 6th Earl of Douglas, his brother David, both who would be murdered in November 1440 at the 'Black Dinner' at Edinburgh Castle in the presence of James II. He was also the stepfather of Margaret Douglas, the "Fair Maid of Galloway."She was to marry cousins William Douglas, 8th Earl of Douglas, and James Douglas, 9th Earl of Douglas.

Prior to 1440 he achieved the status of Knighthood, and c. 1440/1441 he inherited his father's estates. In 1445, Hamilton received letters patent creating him a Lord of Parliament. This charter raised all his estates into the entail of that rank, with its Capital Messuage at the Orchard, (later Hamilton Palace), at Cadzow. Furthermore the charter stated that henceforth the lands would be known as Hamilton as they are today.

James Hamilton accompanied his stepson in law, the 8th Earl of Douglas, to Rome in 1450, and there obtained permission from the Holy See to convert the Parish Church at the new burgh of Hamilton into a Collegiate Establishment, with endowments for a Provost and six Canons

Secondly he married Mary Stewart, Princess of Scotland, daughter of James II and widow of Thomas Boyd, Earl of Arran. They had 3 issue:

He also had Illegitimate (natural) children:

James Hamilton DUKE OF HAMILTON, BRANDON, CHATELHERAULT IN THE KINGDOM OF
FRANCE, WAS KILLED IN A DUEL IN HYDE PARK 15TH NOVEMBER 1712, IN THE 55TH :YEAR OF HIS AGE.

THE RIGHT HONOURABLE WILLIAM Hamilton LORD HAMILTON, SECOND SON OF THE MOST
HIGH AND PUISSANT PRINCE James Hamilton DUKE OF HAMILTON, BRANDON AND CHATELHERAULT DIED 11TH JULY 1734 IN THE 28TH YEAR OF HIS AGE

Robert Hamilton, Prebend of Kincardine, Incorrectly Identified as Son of James and Mary

ask our community of genealogists a question.
Sponsored Search by Ancestry.com
DNA Connections
It may be possible to confirm family relationships with James by comparing test results with other carriers of his Y-chromosome or his mother's mitochondrial DNA. Y-chromosome DNA test-takers in his direct paternal line on WikiTree:

Images: 5
The Hamiltons of Dalzell 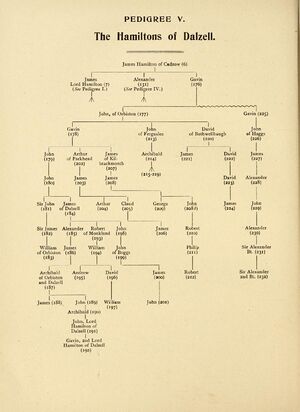 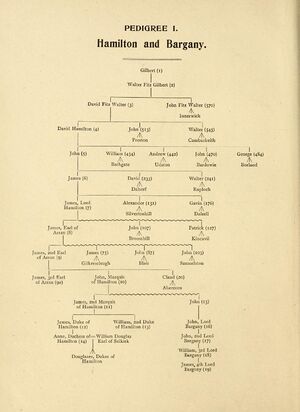 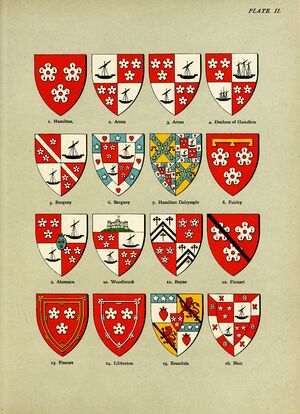 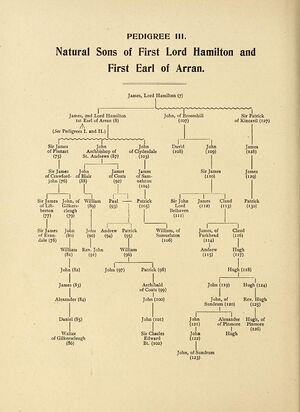 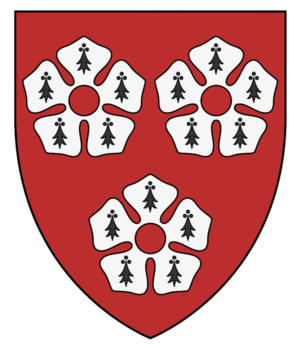 Michael Hamilton
As for the confusion concerning the Hamilton Y-DNA and the Douglas Y-DNA.

In one instance of the Douglas Y-DNA: Y-DNA I-L338 for all of Walter Hamilton of Darngaber's male line? Possibly. (my early Great-grandfather, on my grandMother's side) Y-DNA is possibly I-Y6635 per Descendent of Walter Hamilton of Darngaber, (potentially one of my FTDNA matches). BOTH I-L338 (also known as I1a2a1a1a) and related I-Y6635 (also known as I1a3a1a1a1, Parent Branch: I-Y6624) are of Haplogroup I-M253 also known as I1 (a Y chromosome haplogroup). I-L338 is a well-known Haplogroup of the Douglases.

Walter Hamilton of Darngaber BIRTH 1392 • Cadzow, Lanarkshire, Scotland, DEATH 20 MAY 1441 • Trabzon, Trabzon, Turkey and his descendants were descended from the Douglases and not the Hamiltons.

(And it is not unreasonable to, at least, consider the uncle of Walter Hamilton (of Darngarber, not "of Cadzow"), John Hamilton of Fingalton as not being a Hamilton either as their Y-DNA has been compared. Assumptions to the contrary are very risky.)

Michael Hamilton
I am removing the coat of arms

until it can be certified by the Lord Lyon with the help of someone who is "pre-1500" certified per https://www.wikitree.com/wiki/Help:Pre-1500_Profiles#Adding_Information_without_Certification and according to https://www.wikitree.com/g2g/835548/illegal-images-under-appearing-profiles-scottish-individuals My bad. Hopefully someone can find the time to add a crest or a family coat of arms to such deserving ancestors. Thanks to Madison-125 for the information.