John Hamlin son of Stephen Hamlin and Sarah Poythress THE MOVE On the 22nd of April, 1807, a large group of people left the area of Surry and Sussex Counties of Virginia for Ohio. The party included William Hamlin, his wife and five children; John Hamlin, his wife and five children; Charles Hamlin and five children (his wife having died in Virginia); Jesse Felts, wife and two children; Joseph Sebrell, wife and seven children; Thomas Wood, wife and two children; Jordan Jones and family; some other families and also negro families. (Some of the negroes who accompanied the Hamlins took Hamlin for their surname.)1 According to a letter formerly in the possession of Carrie Hamlin Stevenson, South Haven, Michigan, the seven Virginia emigrant families named above used 36 two wheeled carts drawn by ox teams for the move to Ohio in search for homes in the new and unsettled West. The group arrived at Salem, Columbiana County, Ohio, in June, 1807. There they camped while the men searched for suitable land. Jesse Felts and Charles Hamlin accidentally found the "Stanton" settlement which had been established near Lexington Village several years previously. The Stantons persuaded the men to settle near Lexington in Stark County, Ohio. Eventually, all of the above named families purchased land and built homes in the that area. The settlement in Lexington Township had been made in 1805 1806 by families attached to the Quaker faith.2 Lexington Village was laid out by Nathan Gaskill and Amos Holloway.3 Many of the children of these families intermarried. The late David W. Ault of Alliance, Ohio, was a descendant of four of the above men: Charles Hamlin, Joseph Sebrell, Thomas Wood and Jesse Felts. The other three men were his great uncles: William Hamlin, John Hamlin and Jordan Jones. For years, David Ault researched for the descendants of all seven families and accumulated many notebooks full of the research material but died in 1976 before he could publish a book on the families. His daughter is in possession of his notebooks. A reunion of the descendants of the above seven families is held each year in Lexington Township, Stark County, Ohio. The village of Lexington which was located two miles north of Alliance, Ohio, no longer exists.

Although, as Quakers, the Stephen Hamlin sons and son in laws did not join the Continental Army, they did furnish some provisions for the army. In the "claims" against the new State of Virginia are: Court Booklet No.1, p.7 Sussex Co., Va. now in the Virginia State Library, Richmond, Va. These claims were for goods, etc. furnished to or impressed by the Continental Army Line. Descendants who can prove they are direct descendants of the people who furnished the supplies are eligible for DAR or Sons of American Revolution.

[his fathers will] KNOW ALL MEN BY THESE PRESENTS THAT WHEREAS STEPHEN HAMLIN decd. of the County of Sussex did by his Will and Testament bearing date the Eighth day of January 1773 dispose of his land in the following manner "I give half the Land that I "now live on to my son WILLIAM HAMLIN and the other half to my Son CHARLES HAMLIN only that my son WILLIAM & CHARLES pay unto my son JOHN HAMLIN "Twenty five pounds each of them when my son JOHN comes of age & then the above gift to be good to them and their heirs" reference to the said Will which is duly recorded in the Court of the said County of Sussex will fully appear. And the said Will not directing or describing the bonds by which the said lands should be divided between the said WILLIAM & CHARLES and they now being of lawful age have mutually agreed between themselves to divide the said intire tract of land in the following manner that is to say Beginning on Clements Hix's line on the road that leads from seacories to the Musuck Swamp thence along the middle of the road as it meanders crossing the two first Bridges on the said swamp to John Chappells line and the land being so divided it is further agreed between the said WILLIAM & CHARLES that the said WILLIAM shall have for his part all the land being on the South side of the road it being the part whereon the Manor Plantation & Mansion House stands supposed to contain four hundred acres more or less and the said CHARLES shall have for his part all the land on the North side of the said road and known by the name of the old Town supposed to contain two hundred acres more or less Now the true intent & meaning of these presents is to establish & confirm the partition & division of the said land in manner and form aforesaid Between the said WILLIAM HAMLIN and his heirs and assigns and the said CHARLES HAMLIN and his heirs & assigns forever. And for a full & further confirmation of the said division and partition in manner as aforesaid they the said WILLIAM HAMLIN & CHARLES HAMLIN do by these presents bind themselves and their heirs each to the other of them in the sum of One thousand pounds to abide by and stand to the division and partition in manner aforesaid forever IN WITNESS whereof the said WILLIAM HAMLIN & CHARLES HAMLIN have hereunto set their hands and affixed their seals the twenty ninth day of November. Anno Dom. One thousand seven hundred and ninety. 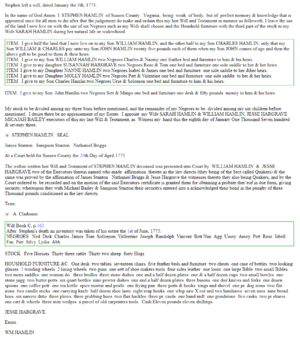 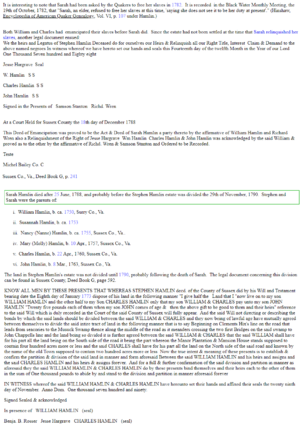