Absalom was born about 1792. He is the son of Joseph Hankins and Nancy Quinn.

Absalom Hankins was an early pioneer in Indiana.

Absalom is found in the poll book as a voter in an election held in Shelby Township, Jefferson County, Indiana, on the first Monday in August 1828.[1]

Absalom was a Justice of the Peace.

Identifying the children of Absalom Hankins and Catherine McCarty of Jefferson County, Ind., takes a bit of fitting pieces of a puzzle together. The obituary of their son Charles Hankins of Jefferson County in 1924 says that he was one of 14 children, although I've been able to identify only 13. Here are the names and the reasoning:

Miriam Hankins (1815/16-after 1870) She m. on 2 Feb. 1832 in Jefferson County, Ahijah Quinn, Nothing directly connects her although her suspect brother Milton had a daughter Miriam. Also, Quinn owned land that adjoined Absalom's at a corner and the Quinns travelled the same migration path as the Hankins.

John Q. Hankins (ca. 1818/19-before 1878) Erastus Hankins listed a John Hankins as his brother. This John owned land in Jefferson County and then moved to Boone County, Ky., not too far from where Erastus lived.

Aaron Hankins (son?) (1815/20?-1840/1850) The obituary of Martha Hankins Sears said she was the daughter of Aaron and Mary Hankins. Martha was widowed and appeared in the household of John Hankins, Absalom's brother in 1850. It's possible the name of her parents was a mistake. Martha was born in 1845. Since Absalom wad the administrator of Martha's husband John Sears in 1861, it seems some connection is probable. Sears died of measles in the Civil War.

Milton S. Hankins (1819/20-9 Apr. 1890) He is not proven as a son, but fits no where else. Besides, in 1850 he was shown adjacent to Aaron and Eliza Hankins Neal (a proven daughter) in Trimble County. Also when Milton applied for a Civil War pension, Nancy Smith, presumably Nancy Hankins who married James Smith, said she was at the marriage of Milton to Susan Cox in 1839.

William T. Hankins (1821/22-2 Aug. 1905) Born in Indiana, he was listed in Boone County, Ky., in 1840. Erastus said William was his brother. Also, a transcription reportedly shows William as Absalom's son. I did not find the stone and do not know if that information was on it or whether that was an added note.

Thomas Hankins (1824/25-after 1880) He was born in Indiana and lived in Boone County. In 1850, he was shown six households before his brother John Q. Hankins and about 20 households before William T. Hankins. He was a boarder in the household of Aaron and Eliza Hankins Neal, his presumed sister, in Prestonville, Carroll County, Ky., in 1880. Although the age appears to be 45, instead of 55, he was born in Indiana and it’s likely the age was an error

Erastus Colton Hankins (25 Nov. 1831-7 July 1909) His Kentucky death record shows Absalom and Catherine as his parents. He was shown in their household in 1850.

Daughter, age unknown. The Jefferson County commissioners authorized William Phillips to provide goods to “Mrs. Absalom Hankins for the use of her idiot daughter” on June 9, 1848. There is no evidence of this daughter in the 1850 census.

Incidentally, there is no reason to suspect that the name Charles Lanham Hankins or Erastus Colton Hankins shows a relationship to those families. Charles Lanham was a minister who preached at the Manville Christian Church. Erastus Colton appears in a Milton Township voting list and so was probably a neighbor.

Is Absalom your ancestor? Please don't go away!

ask our community of genealogists a question.
Sponsored Search by Ancestry.com
DNA Connections
It may be possible to confirm family relationships with Absalom by comparing test results with other carriers of his ancestors' Y-chromosome or mitochondrial DNA. However, there are no known yDNA or mtDNA test-takers in his direct paternal or maternal line. It is likely that these autosomal DNA test-takers will share some percentage of DNA with Absalom: 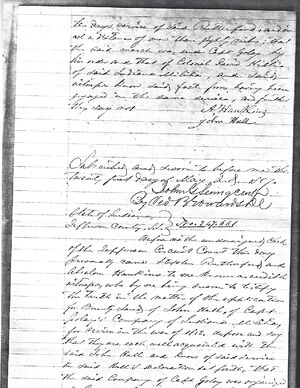