He was the son of William Hanmer and Peregrine North.

Sir THOMAS HANMER ( 1677 - 1746 ), 4th bart. , speaker, diplomat, and littérateur , friend of Harley and Prior , who was educated at Westminster and Christ Church and sat in Parliament (variously for Flintshire and Flintshire Boroughs, Thetford , and Suffolk ) between 1701 and 1727 . He was a Hanoverian Tory , supporting the Occasional Conformity Bill , opposing the trade clauses of the draft Treaty of Utrecht , gaining the favour of Louis XIV on a mission to Paris but resisting the blandishments of the duke of Berwick on behalf of the Old Pretender , and helping to secure the Hanoverian succession. He became Speaker in 1714 , and on the death of Anne was hastily summoned from service at Hanmer church to preside over the critical session that followed. Losing the speakership to a Whig in George I 's first parliament, he was Tory spokesman in debates on the repeal of the Triennial Act , foreign policy, and standing armies ( 1716 ), and spoke ‘angelically’ (according to Prior ) when Sunderland was attacked on the South Sea Bubble in 1721 . After his speakership he lived entirely on his Norfolk estate, devoting himself after 1727 to the production of his great edition of Shakespeare . Details of his career are given in D.N.B. His death without children carried the succession to the great-grandchildren of William Hanmer of Fens ( 1622 - 1669 )[2] 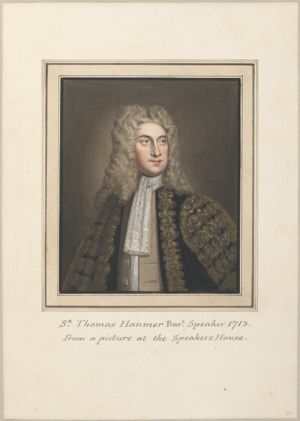 Leave a message for others who see this profile.
There are no comments yet.
Login to post a comment.
Sally x
please link to mother Peregrina (North) Hanmer North-2548
posted Jan 29, 2020 by Sally x
Sally x
Replied on G2G
posted Feb 12, 2020 by Sally x
Kirk Hess
His father was William Hanmer Hanmer-76
posted Aug 23, 2016 by Kirk Hess