George III (Hannover) of Great-Britain and Ireland is a member of the House of Hanover.

George William Frederick or King George III holds the prestige of being one of the longest reigning monarchs to preside over the United Kingdom. Born in London on 4 June 1738 to Frederick, Prince of Wales, and Princess Augusta of Saxe-Gotha, George III is largely remembered for being the person who lost the American colonies and simply "going mad".

He would become heir to the throne upon his father's death 1751; succeeding in 1760 when his grandfather, George II, passed on. Surprisingly, he was the first Hanoverian (House of Hanover) monarch to use English as his first language.

George III enjoyed a faithful marriage - never taking a mistress (common at the time) and shared the birth of 15 children with his wife, Charlotte Sophia of Mecklenburg-Strelitz. Later in life, George III was struck by an illness, possibly porphyry, which caused blindness and senility. As such, he had strange episodes and outburst, which led to the establishment of a formal Regency in 1811. The regent was his eldest son, the future George IV.

George III died at Windsor Castle on January 29, 1820, after reigning for close to 60 years - the second longest in British history.

King George III was king throughout the American Revolutionary war which was the culmination of the civil and political American Revolution resulting from the American Enlightenment. Brought to a head over the lack of American representation in Parliament, which was seen as a denial of their rights as Englishmen and often popularly focused on direct taxes levied by Parliament on the colonies without their consent, the colonists resisted the imposition of direct rule after the Boston Tea Party. Creating self-governing provinces, they circumvented the British ruling apparatus in each colony by 1774. Armed conflict between British regulars and colonial militiamen broke out at the Battles of Lexington and Concord in April 1775. After petitions to the Crown for intervention with Parliament were ignored, the rebel leaders were declared traitors by the Crown and a year of fighting ensued. The colonies declared their independence in July 1776, listing grievances against the British king and legislature while asking the support of the populace. Among George's other offences, the Declaration charged, "He has abdicated Government here ... He has plundered our seas, ravaged our Coasts, burnt our towns, and destroyed the lives of our people." The gilded equestrian statue of George III in New York was pulled down. The British captured the city in 1776, but lost Boston, and the grand strategic plan of invading from Canada and cutting off New England failed with the surrender of the British Lieutenant-General John Burgoyne at the Battle of Saratoga.

Disconnected Hannah Lightfoot as spouse due to lack of evidence. 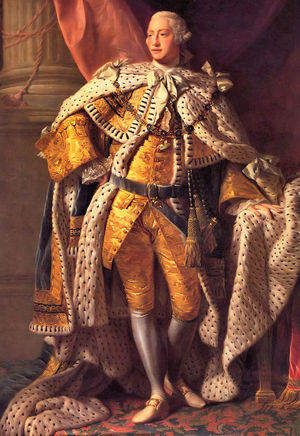 Leave a message for others who see this profile.
There are no comments yet.
Login to post a comment.
Helen (Coleman) Ford
Hanover-223 and Hannover-17 appear to represent the same person because: Same dates represent same person

Jo Fitz-Henry
Guelph, the ancient family name of the Dukes of Hanover, was never used by the branch who became the Kings of England. See this article from the National Archive, Kew:

Do we REALLY need to spell Hannover both ways? It's bad enough we're repeating "Great Britain" twice in a row; do we need to repeat Hanover and Hannover to?

2) If we are really insistent on using both, consider using as the trailing variant the full name: "Brunswick-Lüneburg of Hanover" so we get the single-en Hanover while not just making a list of different ways to spell the same word.

3) Why is "George III" in parens? Is that the convention for monarchs and other nobility with regnal names and numbers? I don't think we're doing that consistently. It wouldn't be horrid would it to just put the "George III" in this monarch nickname, which we're already kind of abusing.

4) Can we shorten United Kingdom to omit its subordinate clauses? It's HIS name we're trying to capture here, not the full name of the kingdom or his full styles etc, which god help us if we need to include all the Defender Of The Faiths and titular kingdoms others have held, in their notional nicknames. Let's focus on the USER of the site.

Wouldn't this be easier on the eye, for a million visitors:

Thanks in advance for your time, efforts, and feedback!

posted Jun 20, 2019 by Isaac Taylor
Isaac Taylor
The surnames of George's children are inconsistent with our nominal sitewide style policy to name people (LNAB) as they were, at the time. For example zero of George's children were born as princes or princesses of the UK; it didn't exist until well after the birth of Amelia, his youngest child. Shall we fix this?

While I'm no expert in this history, a quick scan of online sources, eg

... indicates they were all born to the reigning monarchs of GB (not UK), and thus should all be LNAB of Great Britain, here on Wikitree.

A year has passed since the comment below. What's the plan? Who's doing the work, going forward?

Because the family spanned the transition from GB to UK, this seems like a really good test case for validating (or indicting) our current sitewide style policy regarding naming conventions. Can we make it work, with the site policy and database fields as-is:

So for example, in the simplest case, with no middle name and no marriage, or special titles etc, we have George's favorite child, Amelia who fell in love with a soldier beneath her station:

And in a more complicated case:

In the latter case we are playing a bit fast and loose with what info is supposed to go where, to optimize the way it looks when displayed at the top of our page. There are many alternatives that might be more correct in a stalinist policy sense, but the above example looks pretty good and isn't terribly abusive of what the database fields are supposed to have in them.

Note that in that case "Princess Royal" is just in typed quotes within the other surnames field (not a nickname getting robo-quotes from the HTML/CSS) because we don't want it appearing* before her LNAB or her married name. Also note her married named includes her title as consort as a comma-separated concatenation with her husband's family name. While in this particular case this is redundant, it typically won't be eg "Blah Blah (Piast) Queen of France, formerly Princess of Poland" etc.

Note: Regular Prince Princess titles (especially stuff like Infanta) really want to precede the given name, not get stuffed into nicknames so they precede the surname. We should fix that somehow. In the meantime, I would be OK wiht omitting them entirely, so for exmaple in Charlotte's case above we could omit both the "Princess Royal of" part of the alternate surname; and, the Queen of Wurttemberg title tack-on to her married name as well. Then she would look like this:

In the annoying edge case where the home-country changes names before she marries into her consort-country, then it probably would be correct (but look a little gross) to do:

In this particular case, perhaps it would be slightly less awkward-looking for the profile managers or a style ombud project team to re-sequence her "formerlies" and/or simplify to either:

Gillian Thomas
Hi James - following up my email below, please don't touch these profiles or propose any merges until we get sources to confirm correct surnames (LNABs) and dates of birth and death. Thanks Gillian
posted Feb 08, 2018 by Gillian Thomas

Gillian Thomas
Hi James, this is another duplicate line of your Town family. I will propose the merges for all this family as it is too complicated now with 3 versions of each line.
posted Feb 08, 2018 by Gillian Thomas

Gillian Thomas
Hi James, I have proposed a merge of King's wife that has a duplicate. You have duplicates of each of his children, all created since I asked you not to create any more profiles. Please could you merge the duplicates of each of the children and any descendants. Send me a message if you aren't sure who to do this! Thanks Gillian
posted Feb 08, 2018 by Gillian Thomas

George III is 16 degrees from Donald Howard, 12 degrees from Julia Howe and 9 degrees from Henry VIII of England on our single family tree. Login to find your connection.