George I (Hannover) Hanover is a member of the Hannover.

George I was King of Great Britain and Ireland from 1 August 1714 until his death on 11 June 1727, and ruler of the Duchy and Electorate of Brunswick-Lüneburg (Hanover) in the Holy Roman Empire from 1698 until his death.

In the USA, King George County, Virginia is named in his honor, as is Brunswick County, North Carolina. 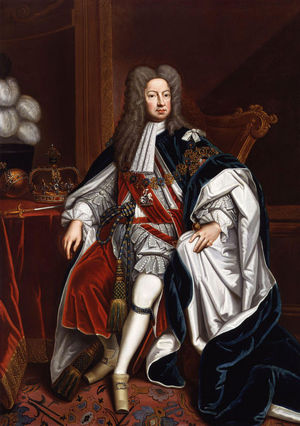 Leave a message for others who see this profile.
There are no comments yet.
Login to post a comment.
Susan Smith
WT policy is the name is spelled as it was when born
posted Nov 01, 2019 by Susan Smith

Scott Lee
Why is George spelled 'Georg' on this profile?
posted Jan 29, 2018 by Scott Lee

George I is 18 degrees from Donald Howard, 14 degrees from Julia Howe and 7 degrees from Henry VIII of England on our single family tree. Login to find your connection.