Ferdinand II Hapsburg was a member of the aristocracy in Europe.

He died in 1637, leaving to his son Ferdinand III, Holy Roman Emperor, an empire still entangled in a war and whose fortunes seemed to be increasingly fading away. Ferdinand II was buried in his Mausoleum in Graz. His heart was interred in the Herzgruft (heart crypt) of the Augustinian Church, Vienna.

Is Ferdinand II your ancestor? Please don't go away!

ask our community of genealogists a question.
Sponsored Search by Ancestry.com
DNA Connections
It may be possible to confirm family relationships with Ferdinand II by comparing test results with other carriers of his Y-chromosome or his mother's mitochondrial DNA. However, there are no known yDNA test-takers in his direct paternal line. Mitochondrial DNA test-takers in the direct maternal line: 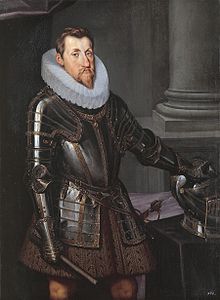 John Atkinson
Habsburg-109 and Hapsburg-24 do not represent the same person because: Although they are both Ferdinand II Habsburg, one is the Archduke of Further Austria, the other Holy Roman Emperor, completely different people.
posted Sep 22, 2015 by John Atkinson

Ferdinand II is 20 degrees from Jaki Erdoes, 12 degrees from Wallis Windsor and 5 degrees from Henry VIII of England on our single family tree. Login to find your connection.