Leopold Wilhelm Hapsburg was a member of the aristocracy in Europe.

He is the son of Ferdinand Hapsburg and Mary Wittenberg. [1]

Born at Wiener Neustadt, he was the youngest son of Holy Roman Emperor Ferdinand II and Maria Anna of Bavaria (1574–1616), daughter of William V, Duke of Bavaria.

His elder brother became Emperor Ferdinand III (1608–1657). Leopold Wilhelm served as a general in the Thirty Years' War and the Franco-Spanish War (1635–1659). During the latter, the Spanish-Low Country forces under Leopold Wilhelm lost the Battle of Lens in an attempt to recover the city in 1648. Later in the war, he sallied forth from the Netherlands on two occasions. On the second, he successfully seized a number of northern French forts in February–March 1652, forcing the French to withdraw forces from Catalonia to reinforce their northern frontier. This assisted Spanish forces in Spain in recovering Catalonia from the French-backed Catalan rebellion.[2]

Is Leopold Wilhelm your ancestor? Please don't go away!

ask our community of genealogists a question.
Sponsored Search by Ancestry.com
DNA
No known carriers of Leopold Wilhelm's ancestors' DNA have taken a DNA test. 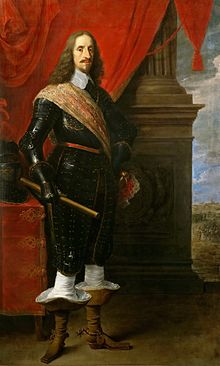 Leopold Wilhelm is 22 degrees from Donald Howard, 13 degrees from Julia Howe and 6 degrees from Henry VIII of England on our single family tree. Login to find your connection.