He is the son of Harald Grenske and Asta Guthbranddatter. He passed away in 1030.

"He died in battle" Olaf II, also called St. Olaf (995-1030), king of Norway ( 1015-28). A Viking (full name Olaf Haraldsson), he was converted to Christianity in Rouen, Normandy, in the service of the exiled King Ethelred II of England. He returned to Norway in 1015 and, as a descendant of King Harold I, quickly won recognition, displacing the ruling earls. He introduced a strong central administration, completed the conversion of the Norwegians begun by Olaf I, and built churches throughout the land. Many local chieftains, alienated by Olaf's domineering ways, sided with Canute II, king of Denmark and England, when he invaded Norway in 1028; Olaf was compelled to take refuge with his brother-in-law, Grand Duke Yaroslav of Novgorod. Returning with a force to Norway in 1030, he was defeated by a peasant army and killed at the Battle of Stiklestad. Olaf was subsequently worshiped as Norway' s patron saint and was canonized in 1164. He was also revered throughout Scandinavia and in England, Germany, and the Baltic countries. His feast day is July 29. "Olaf II," Microsoft( R) Encarta( R) 98 Encyclopedia. (c) 1 993-19 97 Microsoft Corporation . All rights reserved.

The problem points (points of broken genealogy) in the medieval royal lineage in the so-called Fairhair dynasty are:

St. Olav II Haraldsson was a member of the aristocracy in Europe.

Is Olav II your ancestor? Please don't go away!

ask our community of genealogists a question.
Sponsored Search by Ancestry.com
DNA
No known carriers of Olav II's DNA have taken a DNA test. 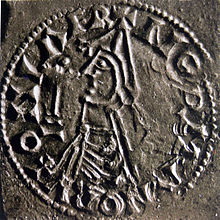