Elizabeth Hardwick, generally known as "Bess of Hardwick", was the daughter of John Hardwick and Elizabeth Leake.[1] She was probably born in about 1527: she was said to be 15 in 1542.[2][3]

Her father died in 1528 and much of the land he held in the area of Hardwick, Derbyshire was placed under the control of the Office of Wards while his son was a minor. Soon after her father's death, her mother remarried, but her second husband, Ralph Leche, was clearly not well off: he spent some years in prison for debt. So Bess's childhood was spent in relative poverty for someone of her background.[1]

On 20 August 1547 Bess became the third wife of Sir William Cavendish, the marriage taking place at Bradgate, Leicestershire[2][3] in the chapel of the Grey family.[1] This was a major social advance for Bess: William Cavendish had just been appointed Treasurer of the King's Chamber.[1] They had eight children, for whom they secured powerful godparents, including Mary I and Elizabeth I:[1]

Bess and her second husband acquired various estates in Derbyshire, including Chatsworth House, which was substantially rebuilt and expensively furnished, Bess overseeing the final stages of the rebuilding after William Cavendish's death. These properties were put into their joint names as a safeguard against their being taken over by the Office of Wards if William died before his heir was of age.[1]

Bess did not remain long a widow. Probably on 27 August 1559[6] (see Research Notes below) she became the second wife of Sir William St Loe.[2][3] They spent much of their married life apart: St Loe was heavily occupied at the court of Elizabeth I, while Bess resided largely at Chatsworth, occupied with building works.[1] Bess herself was appointed a gentlewoman of Elizabeth I's privy chamber, but was dismissed from this post after allegations that she was involved in the clandestine marriage of Edward Seymour and Katherine Grey in 1560.[1]

On 9 February 1567/8 (1568 in modern reckoning) Bess married for the fourth and last time, her husband being George Talbot, Earl of Shrewsbury. They had no children.[1][2][3] Her daughter Mary married Shewsbury's son Gilbert, and her son Henry married his daughter Grace, cementing the union of the two families.[1]

In the year of this marriage, Mary Queen of Scots was entrusted to the custody of Shrewsbury and Bess, and this lasted some 16 years, until 1584. During this period relations between Bess and Shrewsbury soured. Bess accused him of being unfaithful, including with Mary Queen of Scots. The expense of holding the Scottish Queen was considerable, as was the general responsibility involved, and this added to marital strain. In 1574 Charles Stuart, a great-grandson of Henry VII, and his mother Margaret, Countess of Lennox came to visit Mary Queen of Scots. Without telling her husband or Elizabeth I, Bess secured Charles Stuart's marriage to her daughter Elizabeth, angering both Shrewsbury and the Queen.[1] Charles Stuart and Bess's daughter had a child, Arabella Stuart, who became an orphan in 1582, with Bess assuming responsibility for her upbringing.[1] There were also quarrels about Bess's property transactions and financial dealings.[7]

In 1584 Bess and Shrewsbury separated, and Bess went to reside at Chatsworth.[1] She and Shrewsbury made personal accusations against each other.[7] A legal dispute, in which Elizabeth I intervened personally,[7] ended with arbitration by which Bess was confirmed in possession of Chatsworth and awarded £300 a year from Shrewsbury plus a contribution for housekeeping costs: but Bess complained that Shrewsbury was not abiding by the settlement, and even denied her "sufficient fire" (that is, the wherewithal to keep herself warm). One of the arbitration terms was that Bess and Shrewsbury should regularly spend time together, but, after initial compliance, Shrewsbury refused to see her.[7]

Probably to safeguard herself against an adverse outcome to this legal dispute, in 1584 Bess bought Hardwick Hall, Derbyshire from her brother James. She again threw herself into rebuilding,[1] and the resulting house was famed for the extent of its glass windows, allegedly being referred to as

The Earl of Shrewsbury died on 18 November 1590, and Bess became entitled to a third of his disposable estates.[1]

In 1597 Bess went to live at Hardwick Hall.[1] Her difficult relationship with some of her family is demonstrated by the way she changed the original, 1601, terms of her will to disinherit her son Henry and her granddaughter Arabella Stuart.[1]

Bess died on 13 February 1608 and was buried, alongside her second husband William Cavendish, at All Hallows, Derby (now Derby Cathedral).[1][2][3] The inscription on her tomb testifies to her love of major building projects: it refers to her as "aedificatrix" (builder) of Chatsworth, Hardwick, and Oldcotes (Oldcotes being another of the houses she rebuilt).[1] She was an extremely wealthy woman at her death.[1]

There is a tradition that Bess was told that, when she ceased being engaged in building, her death would soon follow. "She therefore continued to build house after house. At length while erecting some almshouse at Derby a severe frost set in. Every means was resorted to enable the men to continue their work. The mortar was dissolved in hot water; and when that failed hot ale was employed. But the frost triumphed, the work ceased, and "Building Bess" died."[9]

It has long generally been held that Bess of Hardwick was dismissed from her place in Elizabeth I's privy chamber over allegations that she was involved in the clandestine marriage of Katherine Grey and Edward Seymour in 1560. See for instance Bess's entry in the Oxford Dictionary of National Biography.[1]

In 2014 article in Notes and Queries, Jane Lawson suggests that it was Bess's sister-in-law, Elizabeth St Loe, who was informed of the secret marriage, was dismissed, and for a time detained in the Tower of London.[10]

There is disagreement between secondary sources over the date of Bess's marriage to William St Loe.

Mary S Lovell in her biography of Bess cites a wedding invitation, dated Tuesday 15 August 1559, sent by William St Loe to Sir John Thynne in which William says that "the day of my marriage is by my Mistress [Elizabeth I] appointed upon Sunday this sevennight", which would be 27 August. This seems therefore the most likely date for the marriage.[6]

This profile was revised for the Magna Carta Project by Michael Cayley on 4 October 2020 and was reviewed/approved 19 Oct 2020 by Thiessen-117. 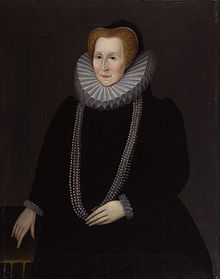 Michael Cayley
I have added a research note on the date of Bess's third marriage, on which there is disagreement.
posted Dec 28, 2021 by Michael Cayley
Monica Edmunds
Is it worth noting as a disambiguation that, as Lady Elizabeth St Loe, she was often confused with her unmarried sister-in-law Mistress Elizabeth St Loe, both being in the service of Queen Elizabeth at the same time? For example, in works such as "The Last Tudor" Bess appears as learning of Catherine Grey's marriage and subsequently being held in the Tower, whereas Jane Lawson's research [pub. Notes & Queries, 2014] "Bess of Hardwick and Elizabeth St. Loe" clarifies that it was not Bess, it was instead her sister-in-law (who was, like Grey, one of the 6 maids in waiting on the queen).
posted Dec 27, 2021 by Monica Edmunds

Michael Cayley
Thanks, Monica. It is helpful to know of Jane Lawson's view. I have read the Notes and Queries article, and, without looking at sources which are not online that Jane Lawson cites, I would not be confident that she is right. Her conclusion is just one researcher's and would seem to go against a long-held view of other historians and biographers that Bess of Hardwick was dismissed from Elizabeth I's Privy Chamber, where she was one of Elizabeth I's gentlewomen, over the Katherine Grey marriage - a view that is reflected among other places in Bess of Hardwick's entry in the ODNB. I am adding a research note.
posted Dec 27, 2021 by Michael Cayley
edited Dec 27, 2021 by Michael Cayley
Monica Edmunds
Lawson is the first person I'm aware of who looked closely at the different manners of address, and I think she makes a compelling case. Also, it seems intuitive that Grey would approach another of the maids of honour with her confession, someone of her own circle. Bess, as a married woman, would not have been one of those six maids of waiting. I suppose it's not impossible that both women could have been penalized over a presumed connection with the clandestine marriage, certainly a wide sweep was made and the two were related by marriage and possibly both implicated. Interesting, anyway.
posted Dec 27, 2021 by Monica Edmunds

Robin Wood
the best of luck, she was a complex lady
posted Oct 03, 2020 by Robin Wood

Michael Cayley
I plan to do some revision of this profile on behalf of the Magna Carta Project.
posted Oct 03, 2020 by Michael Cayley

Michael Cayley
I have now finished the main work intend on this profile. If anyone spots any typos etc, please either correct them or message me. Thanks.
posted Oct 04, 2020 by Michael Cayley

Michael Cayley
Bess of Hardwick is in a trail identified by Douglas Richardson from Gateway Ancestors to a Magna Carta Surety Baron, so I have adopted this profile for the Magna Carta Project.
posted Sep 02, 2020 by Michael Cayley

Amelia (Parrish) Vidrick
"Bess of Hardwick: Portrait of an Elizabethan Dynasty" by David N. Durant, Pg. 1, 2nd Paragraph states, "Bess was married at age about 15 to Robert Barley." skip down a couple sentences: "They were married in1543"

This would make Bess born ABOUT 1528.

Robert was about 12 yrs old., but died the year after they were married," before they were bedded together, they being very young". It was all about having healthy male heirs.

Robin Wood
Some entries suggest that she was not of ful age when she married Robert Barlow, hence she could not have been born much before about 1519, I see the entry in odnb has a question over the 1627 date. So there is some doubt
posted Sep 25, 2017 by Robin Wood

Robin Wood
What dates are you sugesting?
posted Sep 25, 2017 by Robin Wood

The Hardwick origins are from the County of Derbyshire. The Hardwick Family moved into other counties, particularly, Staffordshire, Shropshire, Somerset, Gloucestershire, Leicestershire, Warwickshire etc etc.

"The Reliquary" a journal of archaeology and natural history, produced by the Derbyshire Archeological Ass. carry articles about the Hardwicks and other land owners in Derbyshire. See also publication entitled "The Victoria County Histories". There are Volumes for each UK county.