Edward Harraden (also written Haraden/ Harrendine/ Haradine/ Harrendine/ Harradin) was born before 1627.[1] His origins and parents are unknown. He married Sarah Unknown about 1648.[1][2][3][4][5] (Note he did not marry Sarah Haskell that was his son Edward). He died on 17 May 1683 in Gloucester, Essex, Massachusetts.[1]

Edward was in Ipswich by about 1650 as in 1656 he made a deposition concerning a row of boundary trees which had been standing since before 1652. On 23 Sept. of that year he sued Humphrey Griffin of Ipswich for debt. On 14 Jan. 1655 Edward bought from Thomas Knowlton, shoemaker of Ipswich, the house and 30 acres owned by his deceased brother William Knowlton. Edward paid £34 for this property in cattle and wheat and was bounded by Edward’s other land, the Chebacco River and Harraden’s Creek.[6]

Edward moved from Ipswich to Gloucester in 1657 and bought a house, barn and land on Planter’s Neck from Robert Dutch. Plantars Neck is the peninsula in Annisquam west of Lobster Cove with access to Mill River, the Annisquam River and Ipswich Bay. Edward must have gotten a bit behind in his payments on the property as in Mar. 1662 Robert threatened to sue him for debt, however, it was soon withdrawn.[6]

In the court held in Ipswich on 23 Sept. 1666 Edward sued James Steevens and Anthony Day:

William Hascall Jr, deposed that the constable’s deputy of Cape Ann Came to him when at work and charged him with black staff to assist him in his Majestys name. They went to Goodman Harridines dock where there were two loads of hay on canoes. Then James Steevens and Anthony Day, the deputy, carried away the hay.

Clemant Couldum deposed that he and Thomas Riggs were coming down Annisquam river and saw the deputy with the hay, etc. Also for need of hay Goodman Harridine’s cattle were so poor that they could hardly go in the spring.

William Linkhorne deposed that Edward Harridein was fain to give his cattle wheat for want of hay, and that one of his cattle and four calves died.

Edward and James both claimed ownership of the meadow which was being mowed by both of them. William Lincoln was Edward’s servant. Quite something to see that James showed up with an officer of the law and seized Edward’s own hay which were on his canoes, tied to his dock, near his own house! Also you will notice that the constable “charged him with his black staff”. At the time an officer in need of assistance could touch you with his black staff and thus require you to assist him. Edward finally won the suit.[6]

He was a soldier in King Philip’s War in Capt. Joseph Gardner’s company and was wounded in the Great Swamp Fight 19 Dec. 1675 and received £2 in compensation.[6] This may have referred to Edward Jr. as Edward Sr. would have been 51 years old.

"An inventory of the estate of Edward Harradan, deceased, taken at Gloucester, this 19 of June, 1683, by James Stevens, Stephen Glover and Thomas Riggs.--Amount: £217 07s. 0d., and administration granted to Sarah, relict of the deceased, 26 4 mo. [June] '83. Mentions by amount of Andrew Harraden's inventor, £6, 7s., 0d., added made the above sum. [It appears that Andrew was a deceased young adult son.] 'The names of Edward Harradines children that are now living as follows: The eldest son Edward Harradin, John, Joseph, Benjamin, Marie, Elizabeth, Abegall and Ann.[8]

Although he was called a fisherman he seemed to have had a large amount of livestock for the time. Perhaps he had switched over to husbandry in his old age as working on the water is definitely an occupation for younger people. Unfortunately, Edward’s file at the probate office is now missing all of its papers.[9]

"The Edward Harraden House is a historic house at 12—14 Leonard Street in Gloucester, Massachusetts. It was built on land purchased by Edward Harraden in 1656, who is presumed to have built the house not long afterward. It was one of the early houses in the development of Annisquam village. It is a 2.5 story seven bay colonial with an off-center central chimney. The oldest portion of the house is the second through fourth bays from the left; the interior sections to the right of the chimney was added sometime before 1765. The house was afterward further extended by one bay on each side. The only clear evidence of its First Period origins is in the attic, or is covered over by the walls."[18] 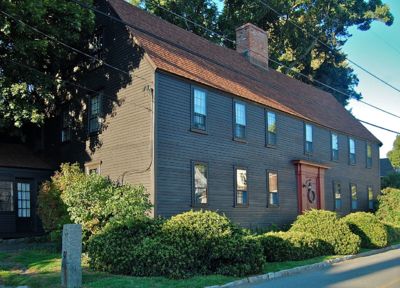 The Edward Harraden House is a registered National Historic house located at 12 Leonard Street in Annisquam village, Gloucester, Essex county, Massachusetts. It was built on the land purchased by Edward Harraden in 1657.[19]
About Edward Haraden, Pringle tells us[20]:

"EDWARD HARADEN came from Ipswich, and in 1657 bought all the real estate owned by Robert Dutch on Planter's neck, and was the first permanent settler in that part of the town. He undoubtedly resided and did business at Squam point. He had several sons and daughters, and his descendants were quite numerous. Jonathan removed in early life to Salem, and in the Revolutionary War was lieutenant of the " Tyrannicide," and afterward commanded a privateer." 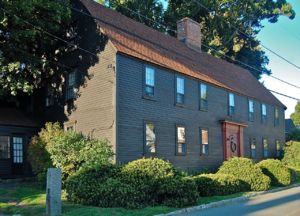 S (Hill) Willson
Is there documentation of this Edward marrying Sarah Haskell? It is interesting because his son, Edward, also married a Sarah Haskell. The birthdates are different for each Sarah, but it got me wondering if it is correct...
posted Jan 25, 2015 by S (Hill) Willson