Despite having no formal legal training, Harris an officer in the New South Wales Corps was appointed a magistrate. He played an important role in the various political maneuverings that occurred in the fledgling New South Wales colony during its first two decades, including the Rum Rebellion. Among his colleagues during this pivotal early period was his fellow Irish-born surgeon and magistrate, Thomas Jamison. In 1817, he was also one of the founding directors of the Bank of New South Wales.

He returned to England, aged 56, in 1810, to give evidence in the court martial of George Johnston for his role in the Rum Rebellion, and also visited his family in Ireland. He married, and returned to Australia in 1814 on the General Hewett.

Dr. John Harris was a wealthy landowner in the Sydney region as well as one if it's longest serving Magistrates; retaining that position until he died on the 27th of April 1838, leaving property said to be worth £150,000. 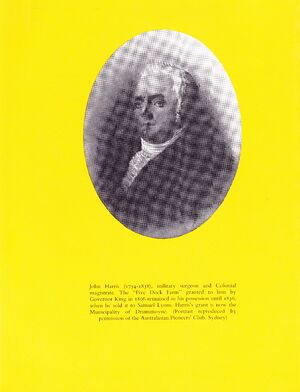