William Harrison was awarded a Congressional Gold Medal in the War of 1812.

William Henry Harrison (09 February 1773 – 04 April 1841) was the ninth President of the United States (1841), an American military officer and politician, and the first president to die in office. He was 68 years, 23 days old when inaugurated, the oldest president to take office until Ronald Reagan in 1981, and last President to be born before the United States Declaration of Independence. Harrison died on his 32nd day in office of complications from pneumonia, serving the shortest tenure in United States presidential history. His death sparked a brief constitutional crisis, but that crisis ultimately resolved many questions about presidential succession left unanswered by the Constitution until passage of the 25th Amendment.

Before election as president, Harrison served as the first territorial congressional delegate from the Northwest Territory, governor of the Indiana Territory and later as a U.S. representative and senator from Ohio. He originally gained national fame for leading U.S. forces against American Indians at the Battle of Tippecanoe in 1811,where he earned the nickname "Tippecanoe" (or "Old Tippecanoe"). As a general in the subsequent War of 1812, his most notable contribution was a victory at the Battle of the Thames (Moraviantown) in 1813, which brought an end to hostilities in his region. Read more here[[1]] “In defeating the combined British and Indian forces under Major General Proctor, on the Thames, in Upper Canada, on 05 October 1813, and in capturing the British Army with their baggage, camp equipage and artillery.” He was awarded the Congressional Gold Medal.

"Give him a barrel of hard cider and settle a pension of two thousand a year on him, and my word for it," a Democratic newspaper foolishly gibed, "he will sit ... by the side of a 'sea coal' fire, and study moral philosophy. " The Whigs, seizing on this political misstep, in 1840 presented their candidate William Henry Harrison as a simple frontier Indian fighter, living in a log cabin and drinking cider, in sharp contrast to an aristocratic champagne-sipping Van Buren.

Harrison was in fact a scion of the Virginia planter aristocracy. He was born at Berkeley in 1773. He studied classics and history at Hampden-Sydney College, then began the study of medicine in Richmond.

Suddenly, that same year, 1791, Harrison switched interests. He obtained a commission as ensign in the First Infantry of the Regular Army, and headed to the Northwest, where he spent much of his life.

In the campaign against the Indians, Harrison served as aide-de-camp to General "Mad Anthony" Wayne at the Battle of Fallen Timbers, which opened most of the Ohio area to settlement. After resigning from the Army in 1798, he became Secretary of the Northwest Territory, was its first delegate to Congress, and helped obtain legislation dividing the Territory into the Northwest and Indiana Territories. In 1801 he became Governor of the Indiana Territory, serving 12 years.

His prime task as governor was to obtain title to Indian lands so settlers could press forward into the wilderness. When the Indians retaliated, Harrison was responsible for defending the settlements.

The threat against settlers became serious in 1809. An eloquent and energetic chieftain, Tecumseh, with his religious brother, the Prophet, began to strengthen an Indian confederation to prevent further encroachment. In 1811 Harrison received permission to attack the confederacy.

While Tecumseh was away seeking more allies, Harrison led about a thousand men toward the Prophet's town. Suddenly, before dawn on 07 November, the Indians attacked his camp on Tippecanoe River. After heavy fighting, Harrison repulsed them, but suffered 190 dead and wounded.

The Battle of Tippecanoe, upon which Harrison's fame was to rest, disrupted Tecumseh's confederacy but failed to diminish Indian raids. By the spring of 1812, they were again terrorizing the frontier.

In the War of 1812 Harrison won more military laurels when he was given the command of the Army in the Northwest with the rank of brigadier general. At the Battle of the Thames, north of Lake Erie, on 05 October 1813, he defeated the combined British and Indian forces, and killed Tecumseh. The Indians scattered, never again to offer serious resistance in what was then called the Northwest.

Thereafter Harrison returned to civilian life; the Whigs, in need of a national hero, nominated him for President in 1840. He won by a majority of less than 150,000, but swept the Electoral College, 234 to 60.

When he arrived in Washington in February 1841, Harrison let Daniel Webster edit his Inaugural Address, ornate with classical allusions. Webster obtained some deletions, boasting in a jolly fashion that he had killed "seventeen Roman proconsuls as dead as smelts, every one of them."

Webster had reason to be pleased, for while Harrison was nationalistic in his outlook, he emphasized in his Inaugural that he would be obedient to the will of the people as expressed through Congress.

But before he had been in office a month, he caught a cold that developed into pneumonia. On 04 April 1841, he died--the first President to die in office--and with him died the Whig program. [2]

In 1795 Harrison met Anna Symmes, of North Bend, Ohio. She was the daughter of Judge John Cleves Symmes, a prominent figure in the state, and former representative to the Congress of the Confederation. When Harrison asked the judge for permission to marry Anna, he was refused. Harrison waited until Symmes left on business, then he and Anna eloped and married on 25 November 1795. Afterward, concerned about Harrison's ability to provide for Anna, Symmes sold the young couple 160 acres (65 ha) of land in North Bend.

Together they had 10 children. Nine lived into adulthood and one died in infancy. Their son, John Scott Harrison, would grow up to become a U.S. congressman from Ohio and the father of Benjamin Harrison, the 23rd American president. Anna was frequently in poor health during the marriage, primarily due to her many pregnancies. Nevertheless, she outlived William by 23 years, dying at age 88 on 25 February 1864.

Harrison is also believed to have had six children with one of his female slaves, Dilsia. When he ran for president he did not want "bastard slave children" around, so he gave four of his children to his brother, who sold them to a Georgia planter. Through this family line, Harrison is the great-grandfather of famous black civil rights activist Walter Francis White. White was the president of the NAACP from 1931–1955. 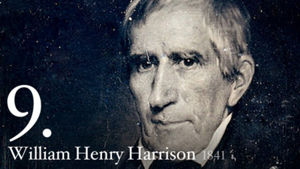 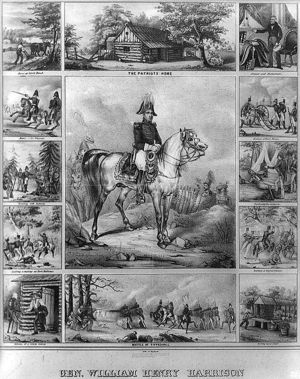 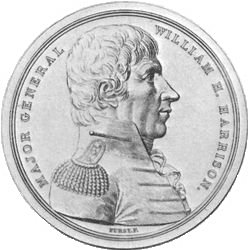 Ira Franklin Mansfield was born June 27, 1842, in Poland, Geauga County, O. His ancestors for several generations were military men. ... His grandfather Ira, was likewise noted for exploits against the Indians and was captain of a company under General Harrison on the Western Reserve.