Mary (Harvey) Beardsley migrated from England to the American Colonies.

Mary Harvey was baptized on 5 June 1605 at Ilkeston, Derbyshire, England, a daughter of Richard Harvey and Ellen (Elliot).[1]

"Marie Beadsley .. 26" and her husband, "A Mason Wm Beardsley ... 30," along with their three eldest children: Marie aged 4, John aged 2, and Joseph aged 6 months, sailed aboard the Planter, Nicholas Trarice, Master, which embarked on 02 April 1635 from England. The passengers brought a certificate from the Minister of St. Albans, Hertfordshire, England, [Rev. Adam Blakeman].[2] Two of Mary's siblings were also aboard the Planter, Richard Harvey and Ann Harvey.[1]

Mary's date of death is unknown. She was last known living with certainty on 28 March 1674 when she appears on a list of the inhabitants of Stratford.[4][1] Mary is assumed to have died at Stratford, where she lived.

A plaque was dedicated to William and Mary Beardsley on the 300th anniversary of the founding of Stratford (see William's profile for details). The plaque was placed on a boulder from the Beardsley homestead, which was located near Sandy Hollow.

Children of Mary and William Beardsley:[1]

More likely, Mary was buried on the homestead or at the first church at Fairfield, CT. The Pequannock (now Stratfield) Church was not formed until 1691.[10] 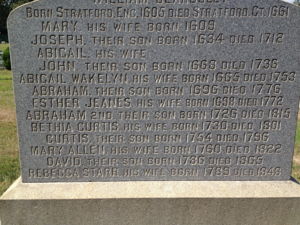 Excerpts from " An Uncommon Journey: The History of Old Dawson County, Montana Territory - The Biography of Stephen Norton Van Blaricom"

"A list of the Inhabitants of Stratford, drawn up by the townsmen and recorded by order from the Govenor and Mr. Jones and Mr. Stowe 27th March, 1668, as followeth and diligently recorded by order from the present townsmen this 28th March, 1668: ... 89. Widow Bearslye, wife of William, half proprietor of house lot and accommodations." (A History of the Old Town of Stratford and the City of Bridgeport, Connecticut, Vol. I)

None of them give dates of acknowledgement. All these dates are when they were recorded (as above), which of course were not necessarily anywhere near the dates of the transactions. Even a date of acknowlegement need not be.

Records pertaining to widow Mary Beardsley are at:

... the latter containing the record ('according to daniels [^ 'beardsly'] information') bearing the date 28 March 1674.

John Beardsley
I agree with Kenneth, the identity of Mary's mother is in doubt. The majority sentiment appears to be that her mother's maiden name should be Elliot, not Horsley, but I do not see sufficient evidence to overturn the present identification.
posted Oct 28, 2018 by John Beardsley
Kenneth Kinman
She is currently shown as daughter of Ellen Horsley, but shouldn't this mother be listed as uncertain?

Better yet, perhaps connect her with Ellen Elliott as the mother instead. I think that is probably what Anderson would recommend. Frankly, I am very suspicious of Ellen Horsley being born in Ilkeston to parents who lived in St. Albans, Hertfordshire.

John Beardsley
I am fine with Harvey AKA Harvie. My memory isn't the greatest, but I believe I PPP'd her as an immigrant ancestor who was part of the PGM.
posted Feb 11, 2018 by John Beardsley

Anne B
Remember that we use their conventions not ours, so Harvie may be the correct spelling of Marie's name at the time of her birth. John, you ppp'd it at Harvie. You probably had a reason. I've looked for that baptismal record and I'm not finding it. Do you really want to change it?
posted Feb 11, 2018 by Anne B

John Beardsley
I cannot access last name at birth, I think due to her being PPP in the PGM or Questional Gateway Ancestor projects. I have no objection to the change if the proper manager with the ability is paying attention to this conversation.
posted Feb 11, 2018 by John Beardsley